Virginia Tech used three consecutive drives in the second quarter for touchdowns to take down Georgia Tech 24-17 in a key Coastal Division matchup. The No. 4 Hokies stay in front of both the Yellow Jackets and the Miami Hurricanes for the right to play for the ACC championship at the end of the season. 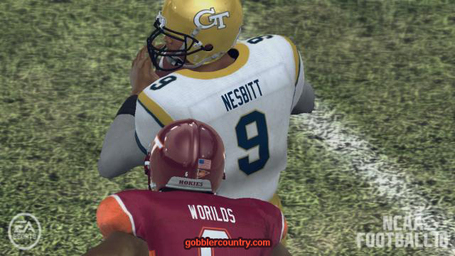 Georgia Tech stormed out of the gate first on a 15-play drive that included only two passes. The Jackets scored on a Roddy Jones 4-yard scamper. The Hokies could only match on their first drive with a long field goal from Matt Waldron.

After a GT field goal to put them up by a touchdown, the Hokies finally picked up the offensive pace as Tyrod Taylor hit Jared Boykin for a deep pass to set up a 2-yard run from Ryan Williams to tie the game up. On the next possession, Jason Worilds sacked the Jackets' Josh Nesbitt to jar the ball loose leading to a recovery by the Hokies' Kam Chancellor. In the blink of an eye, Taylor found Boykin again deep down the field to set up another quick touchdown, this time a 7-yard strike to Xavier Boyce.

The Hokies were not done there as the defense forced a quick three-and-out of the Ramblin' Wreck offense with all three timeouts. With no way to stop the clock, Taylor again made quick work of the Georgia Tech secondary with passes to Boykin and Williams for significant yardage. With just 2 seconds left on the game clock before the half, Hokies head coach Frank Beamer gambled to forgo the field goal, which paid off with a touchdown catch from tight end Andre Smith to put the Hokies up 24-10 at the break.