Share All sharing options for: The old quote still fits

Virginia Tech head coach Frank Beamer is famous for many quotes. One quote in particular really pertains to this season. "It's never as good as it seems, and it's never as bad as it seems."

That "seems" about right after the first five games of the season. Case in point, the Hokies have struggled mightily on offense in two games, played outstanding in two games and were middle of the road in one game (albeit a rainy game). Usually the struggles are on the offensive side of the ball, but this year the mighty defense is starting to struggle. 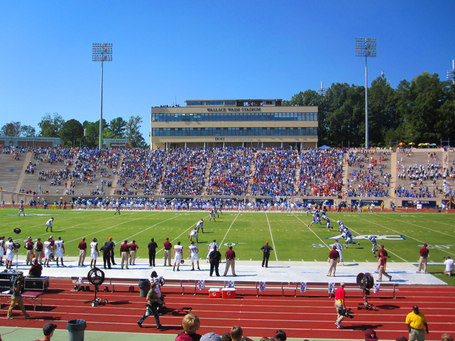 Last season I made the 13 hour trip from Charlotte to Chestnut Hill, MA with a few friends only to leave frustrated because of all the big plays given up on defense. Deep pass after deep pass took the Hokies down on that cold night where most Boston College fans were more concerned about the MLB playoffs than the game in front of their faces.

Beamer and Bud Foster remember last year and last week only amplified the changes that need to be made on defense. Duke is no slouch this year and they will win a game or two - maybe even against rival North Carolina. The Blue Devils blew up the Tech defense with five big plays that are burned into Foster's mind.

I'm not a football savvy individual, but if there's one guy on Virginia Tech's coaching staff that will step up and make changes, it's Bud Foster. If plays and coverages fail to work, he gets rid of them and doesn't go back to them. The same thing cannot be said of the offense with the continuous end around run plays that go for no gain.

Still, with all of the faults on both sides of the ball, it really isn't as bad as it seems. Tech's won four games and lost a close one to a national title contender. The Hokies already have the upper hand in the Coastal Division and are not even halfway through the season.

Sure, the Hokies are in the same breath as Florida, Texas and Alabama when it comes to a trip to Pasadena for New Year's. It's not as good as it seems quite yet. Conference games matter more than ever at this point.