Tyrod Taylor engineered a come-from-behind victory to keep No. 5 Virginia Tech unbeaten in ACC play beating Boston College 21-14 in an overtime thriller. On the first play in the extra period, Taylor found tight end Andre Smith in the center of the field for a touchdown to help the Hokies take their first lead of the game. 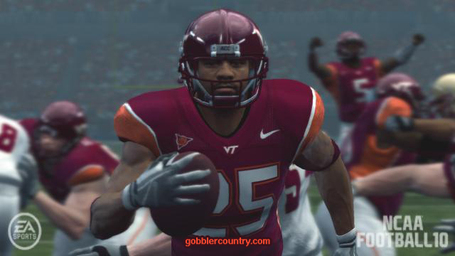 The Hokies struggled in the first half of the game after a Ryan Williams fumble was lost inside the BC 10 yard line on their first offensive drive. Boston College then capitalized on the miscue to score on a 12-play, 91 yard drive finished off with a 14 yard touchdown strike to Justin Jarvis. Tech could only score two field goals in the second quarter, leading to a 7-6 halftime score.

In the second half, the Eagles and Hokies traded several possessions with strong punting. The Hokies' Brent Bowden pinned BC deep in Tech territory only to have the field position battle ended with a 90 yard touchdown pass from BC backup quarterback Justin Tuggle to Rich Gunnell. Boston College was sitting pretty up by eight heading into the fourth quarter.

Things were looking grim for the Hokies until the running game finally started to click thanks to both Ryan Williams and Josh Oglesby. Oglesby finished off the 57-yard drive with a run up the middle for 6 yards to put the Hokies down by 2. Taylor then found Danny Coale on a screen pass for the 2-point conversion, tying the game.