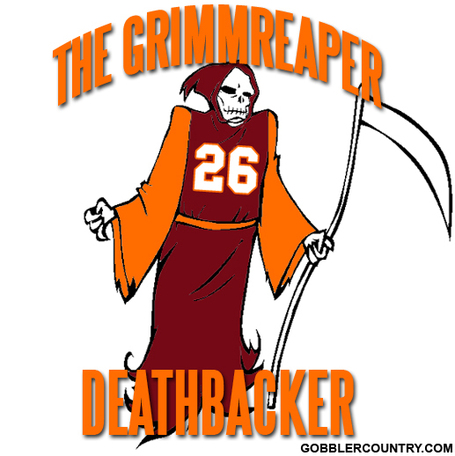 Grimm's Tales (Kyle Tucker)
"I have no problem staying neutral about the Hokies in general. Win or lose, I’m just there to observe and report. But I’m going to admit to breaking that last rule. Without a doubt, Cody Grimm is my favorite player to interview. He wins the award for Guy I’d Be Most Likely To Hang Out With If He Were Just a Normal Dude."

Greg Nosal Toughens Up (Darryl Slater)
"Nosal, a third-year sophomore, might not look like a typical offensive lineman. After Monday’s practice, he walked off the field wearing a form-fitting, long-sleeved workout shirt that hugged more muscle than flab. He is small by no means, standing 6-6 – three inches taller than senior left guard Sergio Render and four inches taller than sophomore right guard Jaymes Brooks. But he is 30 pounds lighter than Render and 20 pounds lighter than Brooks."

Wilson on his future, present (Mark Viera)
"David Wilson said he might want to redshirt next season if his playing time mirrors his marginal role on this year's offense. Evans, who will be back from a knee injury, and standout Ryan Williams seem set up to be a dynamic pair of workhorses next year."

Virginia Tech basketball: Five things to watch (Kyle Tucker)
"After losing eight games last season by four points or fewer, can the Hokies get more key stops this time around? "We had a good season, but we could've had a great season if we were just a little bit tougher on the defensive end," Greenberg said. His team ranked 158th in 3-point defense, 245th in scoring defense. "I just think we've gotten away from our culture a little bit," he said. "We've got to get back to a mindset of stopping people, not outscoring people." To emphasize that point, the Hokies have been spending all but the final 20 minutes of every practice on defense."

#21 Virginia Tech at Maryland (Tech Sideline)
"Virginia Tech travels north to play Maryland in just their second trip to College Park since joining the ACC in 2004. The Hokies won at Maryland in 2005, and have beaten the Terps twice in Blacksburg. Already having clinched a losing record this year, Maryland will be playing for pride. That makes them a dangerous team."

Down East (The A-Line)
"As for the game, well, Tech won. The Hokies won because they are the better team with the better athletes. They also won despite their continuing to look a lot like a team that is still thinking about the Georgia Tech game and playing against an opponent involved in what ECU AD Terry Holland described as their ‘Super Bowl.’ That this was essentially for Tech a meaningless OOC game stuck by ESPN into the middle of the ACC schedule certainly showed up in the generally-lackluster play by the Hokies, but, nevertheless, they still won by 13. A win is a win is a win, especially in the small-time environment in which Tech found itself last Thursday."

Virginia Tech 2009-2010 Men's Basketball Preview (Fight for Old DC)
"I believe that we’re going to do better than the ACC media predicted. That’s generally the way things work with Virginia Tech football and men’s basketball…when expectations are high, we have some issues, and when they are low, we do well. This is an experienced team who has fought in the ACC trenches and knows what to expect in key ACC road games. If the team plays with consistency on defense night-in and night-out, we should finish in the top half of the ACC and grab a bid to the NCAA Tournament."

Hokies Ink Both 2010 Recruits (Tech Hoops)
"Virginia Tech has announced that both 2010 verbal commitments have signed with the Hokies on the first day of the Fall early signing period. Jarell Eddie is a Top 100 recruit in the Class of 2010 by both Rivals.com and Scout.com. He is a 6′7″ wing player that could see time at guard and forward. Jarell is ranked #63 overall by Rivals and #77 by Scout. He’s the #15 small forward by Rivals. Tyrone Garland is a big time scoring guard. Scout has Tyrone as the #26 point guard in this year’s class."

On Jamarr Robinson's Performance (Testudo Times)
"So imagine my surprise when Jamarr didn't play terribly. He didn't light the world on fire - 5-11, just 27 yards - but he made a few plays with his feet and was literally a foot or so away from scoring on two of his first few throws. He wasn't more impressive than Turner, but he shouldn't have been expected to be. He went in, middle of the game, without warming up, losing, with a poor offensive line. It was surprising that he even faired as well as he did."

Dab-O-Meter Update (Block-C)
"The euphoria that erupted two weeks ago with the victory in Miami moved little after the expected thrashing of Coastal Carolina, but has now reached a fever pitch with the thrashing of Florida State. Suddenly the true scale of the Dab-O-Meter is revealed, and the trip to the top is a far longer one than some might expect."

Where and When CPJ gives you the ball (From The Rumble Seat)
"It's kinda interesting because CPJ's just doing what we all knew back when NCAA 2003 came out - the QB dive is unstoppable when you need 1 yard or need to get out of the shadow of your own goal post. I tried to break the chart down as close to 10 yards per division as possible. The key fact in this first chart is that CPJ uses his A backs and B backs to get down the field and then uses Nesbitt's legs once the offense is in the red zone. Less pitches, sweeps, and hand offs versus more midline and QB keepers."

The changing face of BC new media (Eagle in Atlanta)
"Fortunately that has changed. BCeagles.com is constantly improving and adding more content and features. But that is the tip of the iceberg. The University, some key members of the staff and some alumni are also reaching out in new ways."

I, For One, Welcome The Bowl-pocalypse (BC Interruption)
"This year, there is the distinct possibility that the NCAA might not even be able to fill its existing allotment of 34 bowls. College football is flirting with the bowl-pocalypse, writes the Washington Times Patrick Stevens. Last weekend, the number of bowl-eligible teams rose to 44, but the bloated college football season needs 68 to fill its 34 bowls. Can college football scrounge up 24 more teams to fill all the bowls this offseason?"

Fun With 4th Downs (Backing The Pack)
"So, good decision? Let's look at some numbers. On average, teams that start a drive between the 31-40 yard line score twice as often as they do when they start inside their own 10. Based on this fine work from Bill Connelly, we also know that teams convert 4th-and-6s 36% of the time on average. With State's good offense working against Maryland's poor defense, the odds are probably a bit higher than that."

Roy Williams' Hard Work: A Life On and Off the Court (Carolina March)
"Overall, the book is an entertaining read, peppered with observations like this on the Heels loss to Maryland last season: "We turned the ball over. We took stupid shots. We had to make five dumb plays in a row to give them any chance to win, and we made all five." The coach, come to think of it, has a future in blogging."

Lane and Wayne: A Brief History of Two Gangsters (Rocky Top Talk)
"September 21, 2009: Lil' Wayne -- an avid sports fan -- observes the Meyer/Kiffin back-and-forth and solidifies his burgeoning hunch that Kiffin is awesome. So much so, in fact, that he decides to reference Kiffin on his upcoming mixtape."

What does Blount's reinstatement mean for the Ducks? More than you think (Addicted To Quack)
"Blount might have made a difference in the same scenario. In fact, considering Oregon was trying to control the clock on that drive (that 4th-and-three was the seventh straight rushing play) to give its defense a break, Blount is likely the perfect back for that scenario. The power back that Oregon's missed at certain points in the season."

Winning Championships Is Not Always Pretty (Alligator Army)
"In between the hand wringing of Gator fans that UF is not winning with enough style points, and the hand wringing of the national media waiting for a truly dominant team to show up, it is important to remember that some times sports does not work that way. Alabama, Florida and Texas are undefeated, but they are increasingly mature teams. Each team has their own boogie men to deal with (new QB, new coordinator, computers), but continue to win because they know how to."

New Playbook (Black Heart Gold Pants)
"I've heard some murmering in the comments about running a "Wildcat" formation. First of all, I don't ever fucking want to hear anyone call it the "Wildcat" again. I hate that fucking word. Maybe Florida International calls the I-formation "a clown getting fingerfucked by a midget." I don't care. It's still the I-formation. Let the Miami Dolphins call their dog and pony show the "Wildcat." I'll call it what it is. The fucking single wing. And that leads me to my first play."

Top 15 Names for the Tulsa WNBA Team… (The Lost Ogle)
"3. Breasts. There may not be a better marketing strategy than breasts. Since breasts will bring fans to the games, it should be considered."

London Games Officially Outlaw ‘Professionals’ (Bootlegger Sports)
"Olympics Minister Tessa Jowell, who sounds like she’d be loads of fun at parties, says she hopes the Games "don’t become a target for this vile trade and don’t become tainted as a result." I’m not exactly sure what idealistic image of the Olympics Jowell has, but the absence of prostitutes seems like it would create a more tainted Games than their inclusion would."

Is This Tim Connolly's Year? (Die By The Blade)
"Connolly's health is extremely vital to this organization's success. An elite puck-handler, the 28-year-old is creative, owns outstanding vision, prompt movement and soft hands. If it comes down to a single player covering him, chances are he'll make them look like an amateur."

Change 'Dem Sox!: Jim Thome A Red Sox In 2010? (Over the Monster)
"Thome is also a perfect candidate for the Sox because he has a fantastic batting eye. His lifetime .404 OBP (with a .277 batting average) would make him fit right in with players like Dustin Pedroia, Kevin Youkilis, David Ortiz, J.D. Drew, Victor Martinez and, potentially, Jason Bay (and hopefully whoever our new shortstop is)."