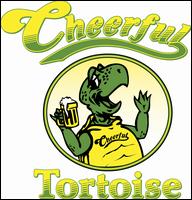 With all the bad news surrounding the Terps leading into this weekend's game, I think Maryland needs a little cheering up. At the very least it needs a trip to my favorite bar when I'm in Portland, Ore.: The Cheerful Tortoise near Portland State.

Unfortunately, the Terps are miles and miles away from that watering hole in the PDX, both figuratively and literally. They're 2-7, they're quaterback just got downgraded to doubtful for Saturday's game, they're struggling to sell tickets and the Fridge is getting delusional by thinking he'll be around next year to run the option. But cheer up, Terp fans. It's basketball season. And you're probably going to kick our ass at that this year.

Foster and Memphis? Not buying that one (Randy King)
"Foster will get his break. If he hangs around Tech, he will be the man when Frank Beamer hits the golf course on a permanent basis. My guess is that may not be as long as some think, either. Of course, it never hurts to keep the ol' name in circulation, either, when it comes to the fast-moving world of college football and the Internet."

Williams a Doak Walker Award semifinalist (Nathan "Tommie Frazier" Warters)
"The accolades keep rolling in for Virginia Tech redshirt freshman tailback Ryan Williams. He didn’t actually win this honor, but being named one of the 10 semifinalists for the Doak Walker Award is a pretty nice accomplishment. Of the players named to the semifinalist list, all but two are upperclassmen. Pitt’s Dion Lewis is the only other freshman."

Morgan returns to starting role (Mark Viera)
"For Virginia Tech rover Davon Morgan, the hardest thing was learning to trust that he was okay. Morgan, who suffered a season-ending knee injury last year, rehabilitated his knee but still was wary of re-injuring himself earlier this season."

Lots on Linebackers (Kyle Tucker)
"The transition from Johnson starting (and looking like he’d hold the spot for three years) to Gibson taking his job and ALL the snaps last week seems sudden. But not really. It’s been pretty gradual over the past six games. The first three, though, are what made this all seem so unlikely."

How common is dirty play in women’s soccer? (Darryl Slater)
"By now, plenty of you have probably seen the crazy footage of New Mexico women’s soccer player Elizabeth Lambert going absolutely nuts in that game against Brigham Young. A lot of people wonder how common this is in women’s soccer. Virginia Tech’s leading scorer, freshman midfielder Kelly Conheeney said she has experienced similar, though not as dirty, tactics before. Most often, it was an opponent not-so-discretely trying to take out her ankles."

Tech coach Seth Greenberg discusses his new motion offense (Norm Wood)
"He consulted friends in his own fraternity of coaches. He studied old videos. He spent hours looking at screen plays and proper spacing using Synergy Sports Technology, a resource that features almost immediate archiving and editing of very specific plays from basketball at the high school, college, women’s college, NBA and European professional levels. After all that preparation, Greenberg and his coaching staff are in the process of installing the motion offense. It’s not exactly an offense designed for overnight success, considering it's free-flow style can take some getting used to by coaches and players."

Turner downgraded to doubtful (D1scourse)
"There's a slight tick in Maryland quarterback Chris Turner's status --- and it suggests it might be time for the Jamarr Robinson Show against Virginia Tech. "Chris is doubtful," coach Ralph Friedgen said. "We'll have to see at game time how we make that decision.""

Student tickets still available for Saturday's game (Terrapins Insider)
"Way back on Aug. 25, Maryland announced that Saturday's game against Virginia Tech was sold out. But on Wednesday, the school sent out an e-mail saying that student tickets, and student guest tickets at $25, were still available. The e-mail also encouraged students to wear black to the game for "Blackout 09.""

Could Terps run the option next year? (Tracking the Terps)
"The subject of the option came up at Fridge's media availability today during a discussion about Georgia Tech's success with it this season. Fridge, who has used a variation of the option when he was offensive coordinator at Georgia Tech, said he'd think about it for the Terps next year."

A Season Without Villains (Burnt Orange Nation)
"There's something wrong this football season. For a while, I think maybe it is just me: I'm turning 30 next week. I'll be married within a year. I've been writing this blog for a full five years now. Maybe, I wonder, it feels like I'm just going through the motions because I'm burning out, ready to turn a corner to something new."

Mountain West Expansion Talk was all a Rumor (Mountain West Connection)
"There is always some truth to this rumor of expansion, and I still contend that Boise will get the invite but the other schools are an unknown. However how cool would it if the Mountain West could actually go out and get big name opponents and not worry about going undefeated each year. If the Mountain West had twelve teams now BYU could still be in the hunt for a BCS game by losing only one conference and the Florida State game."

Corwin Brown Says Things (The Birddog)
"Well, now, it appears that someone’s completely overreacting, and it’s not the guy whose name rhymes with "See who got the polo." Coach Niumatalolo said that after his offense struggled in last year’s game, he expected Notre Dame to do the same things this year. Is that unreasonable? How does that turn into "didn’t prepare well" or "didn’t have a good game plan?" You think that maybe Niumatalolo figured he’d see the same defense out of Notre Dame because that’s exactly what Jon Tenuta said he was going to do?"

Duke Guest Blogger: Nobody Edition! (From The Rumble Seat)
"There is nobody on the interwebs who blogs about Duke Football or who cares (yet) enough to write about Duke football. There are very few students who even care to go to the games before Duke football. But do you know what Duke students do do? (heh heh do do). You will find plenty of Dookies hanging out in the parking lot of the stadium. It's surely not tailgating. Rather it's a massive party of kids who dress in bright colors (no no clothes), parade to the stadium, get drunk and then go home. See for yourself."

Did you know? (Annette)
"Virginia Tech’s first nine opponents have a winning record heading into this weekend’s play. Virginia Tech is the only FBS school out of 120 teams that can lay claim to this as every other team in the country has played at least one team with a .500 record or a losing record. Virginia Tech’s nine opponents have a combined record of 58-24, and the Hokies’ schedule is ranked as the fi fth-toughest in the country by the Sagarin Rankings."

Robbery victim loves Vols more than law, personal safety (Dr. Saturday)
"For his part, Jackson was reportedly inside the convenience store when the robbery went down in the parking lot and "vehemently asserts his innocence" via his attorney; unlike Edwards and Richardson, he was released on his own recognizance after his initial $15,000 bond was waived. If we don't know his or his classmates' official fate by Saturday, here's guessing they won't be spotted anywhere near the Vol sideline against the Rebels -- much to the chagrin of Corey Zickefoose, I'm sure."

Texas man distracted by bird drives Bugatti into marsh (NewsOK.com)
"A man blamed a low-flying pelican and a dropped cell phone for his veering his million-dollar sports car off a road and into a salt marsh near Galveston. The accident happened about 3 p.m. Wednesday on the frontage road of Interstate 45 northbound in La Marque, about 35 miles southeast of Houston."

This looks cool…. (The Lost Ogle)
"The Snuggie Pub Crawl is simply a pub crawl where the participants wear Snuggie blankets. Known as "the blanket with sleeves," the Snuggie is a sleeved, body-length blanket usually made of fleece material. Marketed primarily through infomercials, it has grown into a pop-culture phenomenon. It has even been rumored that Gary England wears one."

Thunder Stock Report (Welcome to Loud City)
"James Harden – He has been as silky smooth as advertised. Scoring hasn’t come as easily as it did for him at ASU, but of course he was the top dog on that team and that isn’t the role he’s being asked to fill immediately. His passing/playmaking abilities have been better than I remember from his Sun Devil days."

Spinning the NHL Wheel of Justice: Clarke MacArthur (Die By The Blade)
"The Clarke MacArthur hit is the major debate here in Buffalo as well as in Edmonton. Over at Copper and Blue, they are calling for a minimum ten game suspension which makes sense because it was an Edmonton player who was injured. Here, most of our readers believe that MacArthur should not have been given the five minute major but rather two or less. The question is what will the league think about the hit?"

Buffalo - Springfield Post-Game. That Was Springfield, Right? (The Copper & Blue)
"Would-be Falcons were certainly making an impact on the night. Whether it was Ryan Potulny's limp-wristed feebleness leading to the first goal or Liam Reddox getting nerve stapled by Clarke MacArthur on a play that should be a ten-game suspension and will be a firmly shaken finger from Colin Campbell saying not to do it again, it was all about the guys from the Falcons."

The Washington Capitals: 99% Entertaining (Japers' Rink)
"How so? Besides the ever-entertaining cast of characters donning the red, white and blue on a nightly basis, the Caps have been in every game they've played and have kept fans on the edges of their seats... when they're not standing up cheering goals, that is (and at bargain prices, no less)."