Josh Oglesby scored the go-ahead touchdown with 21 seconds left in the game to help Virginia Tech come back to beat NC State 31-24 in a thriller. 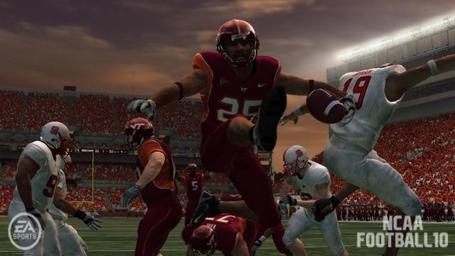 The Hokies rolled out of the gate in the first half, scoring 20 unanswered points in large part to senior tight end Greg Boone. The crowd favorite caught two touchdowns in the first half to lead the Hokies to a 20-point cushion.

Things were looking good for the Hokies until Russell Wilson and the Wolfpack started to heat up midway through the second quarter. Wilson finally hooked up on his first touchdown of the day with Owen Spencer to cap a calculated drive with just over 30 seconds until halftime. Instead of running the clock out before the half, Tech decided to try to score one more time when Tyrod Taylor got picked off by Audie Cole. Wilson took only two plays to hook up again with Spencer for a long 34-yard score and the Wolfpack had all the momentum heading into the locker room down by six.

State didn't stop when the third quarter began. In the opening possession, the Pack scored a field goal before Taylor was picked off again. Four plays later, State had their first lead of the game, 24-20 in front of a stunned Lane Stadium crowd.

The Hokies dug deep in the fourth quarter and cut the lead to just one point thanks to a Matt Waldron field goal. State got the ball back and did some damage but missed a field goal attempt with 2 minutes to play.

Two minutes was all Tyrod Taylor needed to lead Tech on a 15-play drive including four quick run plays capped off with the touchdown run by Oglesby.