Man, I haven't participated in one of these for a couple of weeks. This time it's hosted by the guys over at From the Rumble Seat. Apparently the workload for Imaginary Engineering majors at Georgia Tech is zero because they were able to come up with seven freaking questions. Expect a lot of pith.

1. Alright fellas, this is your turn to apologize to the Boston College Eagles who went to Hell and back and have now arrived as the 3rd team for the ACC (and only team in the Atlantic) to be bowl eligible. You know you were snickering in the preseason. Also, give a high five to Mark Herzlich for finishing his last treatment of chemo.

Herzlich is going to destroy us next year. Just like I hoped he would.

But other than that, I'm not apologizing to BC just because the Atlantic played down to its level.

A win over any of those four teams would be great for the Yellow Jackets and the league, particularly Penn State. No offense to the other three, but the Fighting Pateros carry a little bit more prestige. Especially since Paterno's teams usually bring it in bowl games.

3. Enough with the CJ Spillers, the Christian Ponders, and the Jacory Harrises. We wanna talk defense. Who is the defensive POTY thus far in the ACC?

DeAndre McDaniel's seven interceptions are impressive, especially since he's not padding those against trash non-conference opponents. Six have come against ACC teams. Derrick Morgan was unstoppable at the beginning of the year, but his sacks and tackles for loss have tapered off now that teams are focusing on him more. I'll go with McDaniel, who has 60 tackles to go along with all those picks.

4. Recently, Bird compared the Atlantic to the Big 12 North.Is this a fair comparison? The Coastal is currently 8-2 against the Atlantic. There are still 8 interdivision games left. Can the Atlantic redeem itself this season?

The Atlantic can go 2-16 against the Coastal, but if it wins the ACCCG, that's redemption. And in my opinion the Atlantic is slightly better than the North. Especially since the team perceived to be strongest in the North, Kansas, just got wholloped (does anyone know AP style for wholloped?) by a Texas Tech team that was embarrassed by Texas A&M at home. 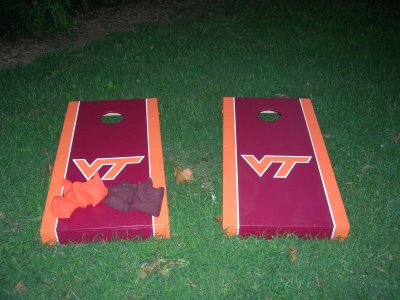 Sheep. And the flock followed Beamer right off the cliff and let Georgia Tech effect the way they played in their next game. I just hope this doesn't turn out to be 2003 all over again.

7. Create a cocktail in the spirit of your school and explain it to us. Non-edible ingredients are allowed and encouraged.

A shot of Wild Turkey 101. Straight. No chaser, pussy.