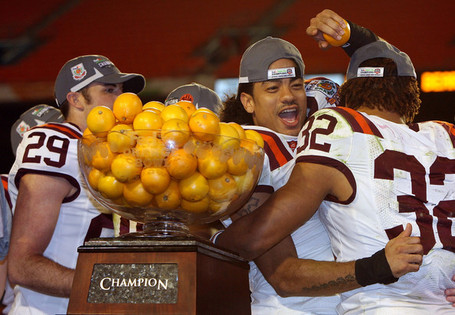 The league announced its bowl lineup for the next four seasons today. Most of the changes were already known, including the conference's addition of the Sun Bowl and subtraction of the Gator Bowl. The Meineke Car Car Bowl in Charlotte got a boost from the shuffling of bowl ties and will fifth among the conference's bowl eligible teams.

After the jump we'll take a look at the ACC bowl tie-ins that begin next season.

A/k/a: FedEx Orange Bowl
Location: Miami Gardens, Fla.
Stadium: Land Shark Stadium (76,500)
Selection: ACC Champion
Opponent: BCS Team TBA
Probable Date: Jan. 1, 2 or 3
The Orange will play whenever the BCS tells it to. Last year it was on the 1st because the Orange also hosted the BCSCG. Most years it will be on the 2nd or 3rd, though.

Even though it's not a "New Year's Day Bowl", the Peach is one of the better non-BCS bowls to be affiliated with. It also gives the ACC an annual bowl game against God's Conference.

A/k/a: Champs Sports Bowl
Location: Orlando, Fla.
Stadium: Citrus Bowl (70,000)
Selection: No. 2 after BCS
Opponent: Big East or Notre Dame
Probable Date: Late December
The Tangerine has been held on a different day of the week each of the last four years. In 2008 it was on a Saturday and this year it's on a Tuesday. If you're going to be this high in the pecking order and feature teams from two BCS conferences, you either need to be on the same date or the same day of the week consistently. The jumping around may be TV's fault, but it's an indication of the perception of this bowl's quality.

A/k/a: Brut Sun Bowl
Location: El Paso, Texas
Stadium: Sun Bowl (51,500)
Selection: No. 3 after the BCS (or ACCCG loser)
Opponent: Pac 10
Probable Date: Dec. 31
Like the Peach, this one is usually on New Year's Eve and held during the afternoon.

That's a long way to travel for an ACC team, especially for a bowl that high in the selection process. To give you an idea of how far away El Paso is, the midway point between Blacksburg and El Paso is right around Little Rock, AR. Feel free to stop at the Stuckey's in Conway near the campus of the University of Central Arkansas on your way. Still, the Sun Bowl is an old bowl full of tradition and is a good edition to the lineup.

A/k/a: Meineke Car Care Bowl
Location: Charlotte, NC
Stadium: Bank of America Stadium (73,778)
Selection: No. 4 after the BCS
Opponent: Big East
Probable Date: Last Saturday in December
This one's been on the last Saturday in December each of the last three years. I like that it's on a weekend and consistently on the same weekend.

This is usually a pretty competitive bowl and it's one the ACC usually wins. The only ACC team to lose this bowl is North Carolina. It's done it twice.

Nashville can be really cold in late December and I've never found it to be a particularly fun destination, but it is usually a fun bowl to watch between the ACC and SEC. It's one the ACC hasn't had much luck in, though.

A/k/a: (Insert Corporate Sponsor Here) Independence Bowl
Location: Shreveport, La.
Stadium: Independence Stadium (53,000)
Selection: No. 6 after the BCS
Opponent: Mountain West
Probable Date: Late December
The Indy Bowl has been on the last Sunday in December the last two years, but moves to Monday this season. The good news is it's the only college football game on that Monday, so the audience could be decent.

A/k/a: EagleBank Bowl
Location: Washington, DC
Stadium: RFK Stadium (45,596)
Selection: No. 7 after the BCS
Opponent: Whoever's bowl eligible
Probable Date: Sometime in December
Last year this game was at least on a Saturday. This year it's on Tuesday, Dec. 29.

This bowl has potential if it can get out of RFK. It's a bad stadium in a decent city with great attractions, just like Orlando.

In all, I think this is an improved bowl lineup over the previous one. No one has to go to San Francisco unless the conference produces nine bowl eligible teams. The Sun Bowl is on equal ground with the Gator Bowl as far as prestige in my opinion, even if it's farther away. However, in 2009-10 the Sun Bowl will pay out over a half-million less than the Gator.

The bowl in Charlotte is improving it's pay-outs which will help the conference. The Tangerine Bowl is almost on equal footing with the Gator as far as payoff, so if it can increase to the same amount as the Gator it will really help the league in total revenue from bowl trips.

Really the only bad bowl in the lot is the Independence. It pays out just over a million and despite its age and tradition, just isn't a very good bowl experience. You know, except for the gambling.