Share All sharing options for: Virginia Tech 16, East Carolina 3: What They're Saying

Of course it's better to win ugly than lose pretty, but the Hokies sure do have a lot of issues to address before getting back into conference play. Let's see, there's offensive efficiency, poor tackling and carelessness with the football (especially by kick returners). Yep, that's all three phases of the game. Practice will be far from easy for Tech's players this week. Let's see what the media and unwashed masses have to say about Thursday night's win.

Hokies, Williams get back on track (Annette)
"Even though Williams didn't get into the end zone, his ability to run the ball and the Hokies' ability to control the line of scrimmage was the difference in the game. Williams showed why he was a midseason favorite to win the ACC's Player of the Year award, as much of his yardage came by breaking tackles, lowering his shoulder and keeping his feet moving. Virginia Tech also got the most complete effort from its defense it has seen in the past two games, and Cody Grimm seemed to be in on almost every play."

We Were Riiiiiiiight (EDSBS)
"Taylor also fumbled once doing that, but he gives, and he takes, and did enough spectacular scrambling to keep Tech drives alive in a 16-3 victory over the ECU Pirates, who shot themselves in the wooden leg all night with drive-killing penalties. Tech freshman Ryan Williams also had 179 clock-killing yards and got to show off the "Sweetness" tat on his forearm for the cameras, so yeah, it was as slow a night of football as one might expect."

Virginia Tech 16, ECU 3 (J.P. Giglio)
"The aesthetic differences, and big-game energy, didn't add up to a new offense, which was held to a field goal in the three quarters and was handcuffed by penalties. ECU committed six penalties, for 60 yards, in the first half, none more costly than a holding call on guard Terence Campbell that negated a 20-yard touchdown run by Dominique Lindsay."

Not pretty, but a win (Mark Viera)
"After back-to-back losses, Virginia Tech needed a win. With a 16-3 victory at East Carolina on Thursday, the Hokies got back in the happy side of the won-loss column, but they were unconvincing. But that did not seem to matter. On Thursday, the cliche that a win is a win applied for Virginia Tech’s players and coaches, who felt at ease after beating the Pirates."

Tech's defense does the trick on third downs against ECU (Norm Wood)
"After Georgia Tech and North Carolina combined to convert on 18 of 34 third down plays in wins against Virginia Tech, much of the grousing this week around Camp Hokie was about Virginia Tech's inability to get opposing offenses off the field when it counted. ECU didn't enjoy nearly the same success as Georgia Tech and UNC, converting on just four of 14 third downs. On third downs against ECU, Virginia Tech surrendered 3.6 yards per play and intercepted a pass. Of course, Tech's offense was equally as inefficient as ECU on third downs, also converting just four of 14."

QB Taylor gets Tech back on its feet (Aaron McFarling)
"Whatever the reason, Taylor's running ability seemed under-utilized, a gift unwrapped only in emergencies. Taylor scored a rushing touchdown in the 2-minute offense against Georgia Tech and drew effusive praise from Jackets coach Paul Johnson -- a guy who mentors QB Josh Nesbitt, the fourth-ranked rusher in the ACC."

Three-game skid avoided (Randy King)
"Riding a career-high 179 rushing yards by redshirt freshman tailback Ryan Williams and a stout performance by its defense, Tech washed away the misery of back-to-back losses to Georgia Tech and North Carolina the past 20 days. It was sweet redemption for Williams. Last Thursday in Blacksburg, the hard-running back lost a fumble for the first time in his college career that set up a game-winning field goal that enabled UNC to beat the heavily favored Hokies."

Everyone Exhales (Kyle Tucker)
"For Taylor, who was again imperfect, it was a night when his leadership shined. After the fumble, he took the team right back and scored on a run almost identical to his crazy-cool scoring scramble against Cincinnati in the Orange Bowl last year. Taylor’s arm was a little erratic, but he hit some clutch throws and he ran for 61 hugely important yards."

Ryan Williams breaks through (Darryl Slater)
"Another interesting tidbit: Tech is now just the third school in Division (I-A) history to produce back-to-back 1,000-yard freshman rushers. Of course, it takes an odd circumstance for this to happen, like Evans’ season-ending knee injury, because why would a 1,000-yard freshman rusher get limited action the next season?"

Hokies snap streak with road victory at ECU (Jimmy Robertson)
"The victory moved the Hokies to 6-3 overall and enabled them to achieve bowl eligibility for the 17th straight season. Tech, now 10-5 in the series and 4-2 all time at Dowdy-Ficklen, has won six of seven meetings against the Pirates and avenged last season’s 27-22 loss in Charlotte. The Pirates fell to 5-4 on the season."

Hokies Run Over Pirates 16-3 (Tech Sideline)
"That was the last time East Carolina had the ball in Virginia Tech territory. Bud Foster's defense was dominant for the rest of the game, using an array of blitzes to pressure quarterback Patrick Pinkney. They only sacked him once, but they threw off the timing of the ECU passing game, and the Tech defensive backs had excellent coverage downfield."

Immediate Reactions to the ECU Game (The North End Zone)
"That game last night, while a good win, was just plain sloppy. Granted we only technically gave up one fumble, but the fumble into the end zone, the fumbled lateral (that was not a forward pass) and the muffed punt were just sloppiness and lack of concentration. We're better than that."

Yawn: Hokies beat Pirates 16-3 (Fight for Old DC)
"Win or lose, this game was nearly unbearable to sit through. Between Lou Holtz and his spitfest, and his blatant (and obviously expected) favoritism for his son's ECU Pirates, I wanted to just cut the game off all together. That doesn't begin to explain my disgust with some of the things happening on the field. While I've been one to jump on the Fire Stinespring bandwagon, and tonight didn't do a lot to sway me from that seat, some players just didn't come to play."

Skip to My Lou and Who’s Your Daddy? (College Game Balls)
Some quality signage from VT-ECU. 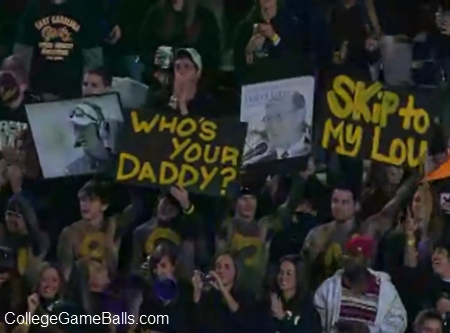