Share All sharing options for: Neutral site? Not a Hokie’s best friend

Virginia Tech opens the 2009 football season less than 10 days from now. I’ve been going to Tech games for over 15 years and I honestly don’t remember such an anticipated game like this season’s against Alabama in Atlanta.

That anticipation is huge in large part to the fact the Hokies are not playing a mid-major or FCS team. During the Frank Beamer era, Tech has opened their seasons with the likes of Akron (3), East Carolina (3), James Madison (3), Arkansas State (2), Bowling Green, Central Florida and Northeastern. Anticipation of the upcoming season beyond Week 1 was the only tidbit keeping Tech fans upbeat for a season opener of that caliber. 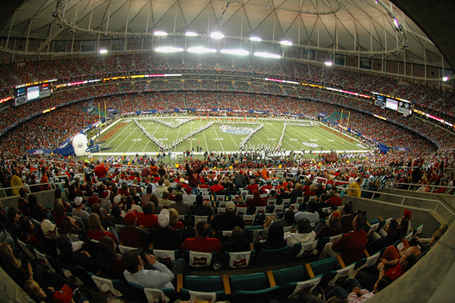 Atlanta's Georgia Dome was not kind to the Hokies in the 2006 Chick-fil-A Bowl.

Thanks to Lane Stadium’s hostile environment, schools don’t want to risk a season opening loss. Neutral site games are the only way to play big teams early. The problem isn’t playing major conference teams, but the neutral site itself.  Under Beamer, Tech’s lost both of the neutral site opening season match-ups (USC in 2004 and ECU in 2008).

It doesn’t stop there. In the same amount of time, Tech has played 23 neutral site events, only winning 10 games. Florida State has won all four of its neutral meetings with Tech. When it comes to the neighboring SEC,  this marks the fifth time Tech will play a team from the "power conference", but the first non-bowl game.

The Hokies have only won one of the four previous SEC neutral site contests – Alabama in the 1998 Music City Bowl.

Neutral sites are something Tech really should steer away from when it comes to season openers. There is nothing quite like opening a season when Enter Sandman is blared over the HokieVision screen and the Hokies rush onto the field in the sea of the Marching Virginians. Anybody would be crazy if that entrance doesn’t bring chills.

Meanwhile, Tech fans will have to wait an extra week for the trip to Blacksburg this season – but they wouldn’t have it any other way.