Share All sharing options for: Welcome Clark to Gobbler Country

Some of you may have noticed the mysterious byline that appeared with last night's post about Virginia Tech's history in neutral site games. That byline, Hokie20, belongs to the newest contributor to Gobbler Country: Clark. A lot of you probably already know Clark from the work he does at his own Web site, CRuhland.com. 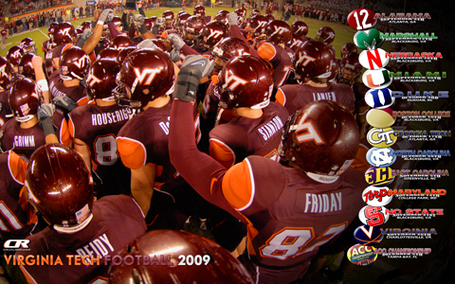 There you'll find the best Hokie desktops on the Internet and plenty of goodies for EA Sports' NCAA football video games. Like me, he's a former ink-stained wretch. Unlike me, he actually went to Tech and lives in the same time zone as the Hokies.

Clark is a huge addition to Gobbler Country because he's very knowledgeable about the Hokies' basketball team. Those of you who think I ignore the basketball team until January (which I do) will be glad to know Clark won't be doing the same. He'll also provide his opinions on the football team and likely do a EA Sports NCAA 10 simulation before each game. Please help make Clark feel welcome as he acclimates himself to his new surroundings.