TV Information for Virginia Tech's Game This Week Against Nebraska

Share All sharing options for: TV Information for Virginia Tech's Game This Week Against Nebraska

It inevitably comes up every time the Hokies play in one of these ABC/ESPN2 Reverse Mirror games, so I figured I'd provide some information to clear things up.

The Hokies are playing Nebraska this week at 3:30 p.m. EDT. The game is part of the Reverse Mirror, meaning depending on where you live it will either be on ABC, ESPN2 or ESPN GamePlan. The main thing to remember is that no matter what, you're going to be able to see the Big Ten game, which is Arizona at Iowa. 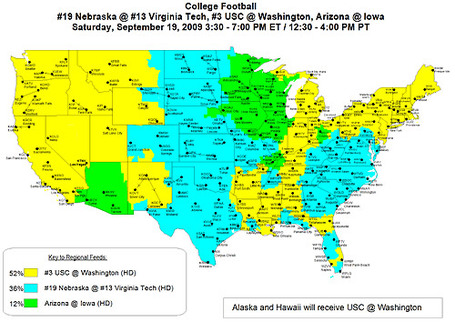 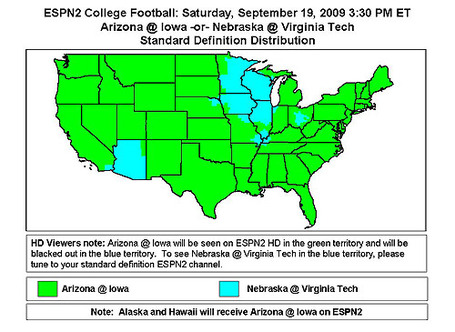 If you're an ACC fan in Boston or Tallahassee, you're SOL on seeing the Hokies this week. I'm pretty surprised at how much of the country is going to see the USC-Washington game. I expected it to be limited to the West Coast since it's going to be a blowout. I'm sure there are plenty of Big Televen fans out there who will also be upset they don't get to see the Iowa game.
All in all, it's a very weird coverage map.