Nicknames are synonymous with sports. "Thunder and Lightning", "Smash and Dash" and "Mr. Inside & Mr. Outside" quickly come to mind. I saw one yesterday that was kind of creative for Virginia Tech running backs - ".38 Special". The explanation made sense with #34 and #4 added together to make 38.

That's creative and all, but isn't there another tailback in the mix? Josh Oglesby may have not had the stellar performance against Marshall like Ryan Williams or David Wilson, but he did play a major role in a scoring drive in the third quarter.

When Darren Evans went down in the beginning of fall practice with the season-ending knee injury, Oglesby was the one to step up and carry the load for the Hokies. He had the game experience and it showed. The sophomore from Garner, NC stayed healthy from that point on showing his durability and dependability as the other two front-runners suffered slight injuries.

Yes, it was Marshall and the Hokies had their way with running the ball. But, Oglesby had the least to gain in terms of experience. He recorded some key first downs in the opening drive of the third quarter. Oglesby better served the Hokies on the sideline while Williams worked on getting back into a starting role and Wilson recorded his first reps at Tech.

Tech will have no problem running the ball this season. The Hokies were thin at tailback last season but the depth this season stands above any other position. 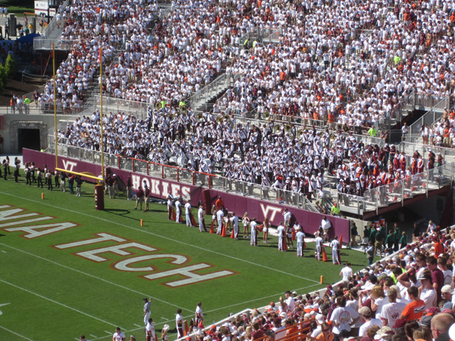 Virginia Tech football is about playing strong defense and running the football. The defense did the best they could against Alabama two weeks ago and now the running game posted over 400 yards last Saturday.

As Nebraska rolls into Blacksburg this weekend, Tech head coach Frank Beamer will really be able to tell how improved the Hokies are, and that will hinge on the legs of all three tailbacks - not just two.