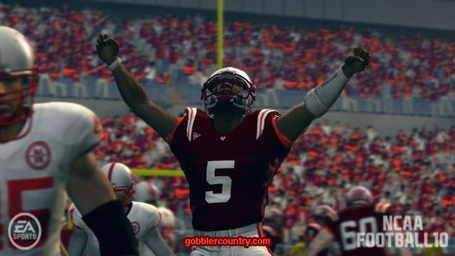 Virginia Tech busted out the maroon throwback uniforms as they welcomed the Nebraska Cornhuskers to Blacksburg. The No. 19 Huskers marked the first visit to Blacksburg by a ranked non-conference opponent since No. 6 West Virginia visited in 2004. Strong defense prevailed as the No. 13 Hokies took care of business 38-10 in front of a Lane Stadium capacity crowd.

It didn't take Nebraska long to get on the board as it only took four offensive plays to get into the endzone via a 50-yard strike from Zac Lee to tailback Roy Helu Jr. Tech could only answer on the next drive with a 27-yard field goal.

Starting the second quarter, Tyrod Taylor engineered a 15-play, 97-yard drive finishing with an 11-yard pitch-and-catch to Xavier Boyce. From that point, the Hokies held a lead they would not relinquish. On the ensuing drive, Tech's Cody Grimm picked off a Lee pass on the Huskers' 29 yard line. That interception led to a David Wilson touchdown, putting the game out of reach for Nebraska. The Huskers tagged on a field goal at the break with the score of 17-10 in favor of the Hokies.

As the Hokie defense held strong in the second half, Tech's offense chewed up the clock with long drives on the ground, wearing out Nebraska's front four. Ryan Williams added two touchdowns to the mix and even fullback Kenny Jefferson scored on a 3-yard goal line play.