Share All sharing options for: Still in shock a few days later

Driving to work this morning I heard a Nebraska fan call in to a national sports radio show. He wasn't too happy with the outcome of Saturday's game, and rightfully so. His Huskers played just well enough to beat Virginia Tech for just over 58 minutes.

Tyrod Taylor had the final two. 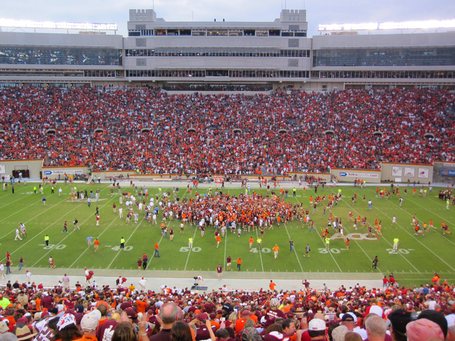 Sitting in the stands after that game, I was shocked like the rest of the Hokies around the country - How in the world did they pull that off?

Both teams played hard with defense dominating the game. Nebraska could only make field goals the whole game, but made some big plays when it counted. Tech, on the other hand, didn't make those big plays even for short yardage on third down.

Nevertheless, the Hokies made two big plays down the stretch and pulled off a win for the ages and leaving both fan bases stunned with what occurred in front of their eyes on that cloudy Saturday afternoon in Blacksburg.

I'm still shocked even four days later. I grew up watching the Hokies lose a few close games like that, especially not manufacturing a drive in the final minutes. It's not the drive itself that is shocking as much as the fact the offense had not done anything all day.

Nebraska's defense held strong, but every team blows coverage once in a blue moon. The Hokies easily could have lost that game on a Husker score in the third quarter, but penalties cost Nebraska so much they had to punt.

Enjoy the victory not only because of the wild finish, but because it was against one of the most storied programs in the sport. Nebraska could easily contend this season for the conference title if they can manage to get the ball into the endzone once in a while.

The same goes for Virginia Tech.