Virginia Tech's 3-1 record is pretty stout after playing three ranked teams in the first four games of the season. Plenty of questions surrounding this squad still remain unanswered as the Hokies dive into the ACC schedule. One third of the way through the regular season, it's time for some first-month awards. 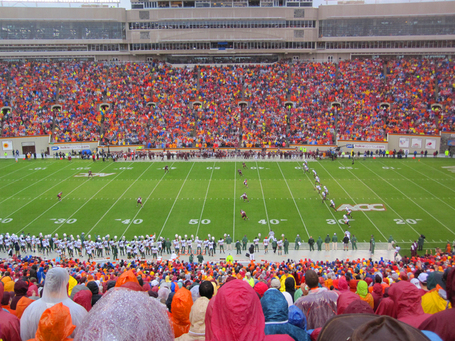 Top Rookie
David Wilson - HB: Wilson's first performance against Alabama was short-lived, but he quickly burst onto the scene against Marshall in Game 2. Leading the Hokies in rushing in his first game at Lane Stadium with 165 yards is quite a rare site.
Runner up: Jayron Hosley

Top New Starter
Jake Johnson - LB: Jake is starting to make a name for himself with that huge neck restrictor and powerful shots to the opposition. Sure, he missed a few tackles against Nebraska, but he still leads the team in solo tackles with 13 and is tied overall with 32.
Runner up: Beau Warren

Top Offensive player
Tyrod Taylor - QB: Tyrod would not have been selected for this spot mid-way through the month. Taylor has worked hard to make quicker decisions and the rain against Miami amplified it. He knew he could use his legs just as well as his arm, because after all, he is a dual threat quarterback.
Runner up: Josh Oglesby

Top Defensive player
Jason Worilds - DE: If you get a chance to go to the Duke game on Saturday, take a few plays to watch Worilds in action without following the ball. This guy plays through pain and takes care of business when nobody else can penetrate the offensive line. Don't be surprised if he reaches the 10-sack plateau by season's end.
Runner up: Rashad Carmichael

Surprise player
Barquell Rivers - LB: The redshirt sophomore is tied with Johnson for the lead with 32 sacks. Ever since his big plays in the Orange Bowl, Rivers has quietly made big plays in the middle of the field and breaking up passes on the perimeter.
Runner up: Nekos Brown

MVP
Ryan Williams - HB: He could have fit in with the Rookie category, New Starter, Offensive Player or Surprise Player. Williams has been the best player and has picked up the entire Virginia Tech team and carried it on his back. His burst of speed and power is just what the doctor ordered for a struggling passing game.
Runner up: Cody Grimm

Assistant Coach
Bud Foster - Defensive Coordinator: Who else would it be?