Looking back at 'Bama

Share All sharing options for: Looking back at 'Bama

Virginia Tech made $2.8 million to play Alabama last weekend in Atlanta. That's not bad from a financial standpoint. But consider the fact that Tech makes way more than that for a meaningless home game against a 1-AA school. The risk was worth it for Tech to play in this game, but the neutral site is starting to hurt the Hokies way more than help. 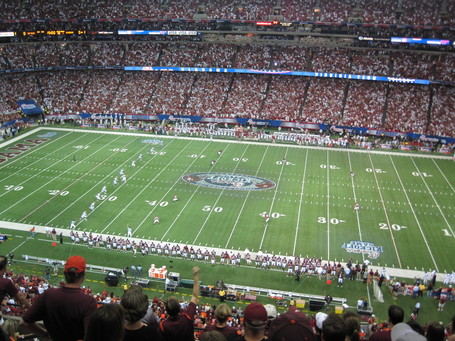 Leaving the Georgia Dome after the game was tough after watching such a good game. Alabama fans were rejoicing with their usual "Roll Tide" chants that are extremely annoying. Thing is, ‘Bama didn't roll all over the Hokies - Tech just ran out of gas.

The inept offense proved to be an extreme liability during the game. Head coach Frank Beamer can say all he can about being four or five plays away from a big game, but it didn't happen. Tyrod Taylor seemed uncomfortable and his passing struggled mightily. The Tide blitzed at the right time and assignments were missed. Taylor has to use his legs more, because that's what the identity of the offense is.

Virginia Tech made it to the national stage on the legs of Michael Vick. Vick broke every huddle as a running quarterback - he thought run just as much as pass. Taylor breaks every huddle thinking he is a quarterback that can run - he thinks pass before he gets hit from waiting too long.

It is obvious offensive coordinator Bryan Stinespring would rather run the ball every play, which is truly a shame considering the amount of NFL receivers that have recently played in this system. The line has a tough time holding blocks in the passing game and something as simple as moving the pocket can play dividends.

The loss this past weekend is far from devastating. The ACC as a whole had a garbage weekend and Tech shined even with the loss. Tech lost to LSU in 2007 and was one play away from playing for the national championship that season with the late touchdown to Boston College.

I'm not going to be super critical because it is the first game of the season. Atlanta was a great place for a game, but I still would have rather opened the season against a 1-AA opponent like Virginia or Duke ... Oh wait, not LIKE Virginia or Duke.