Virginia Tech 45, Central Michigan 21: This is How the Hokies Should Run Out of the Shotgun

Share All sharing options for: Virginia Tech 45, Central Michigan 21: This is How the Hokies Should Run Out of the Shotgun

For nearly the first half of the season, the Hokies continued to frustrate me and several others by insisting on running out of the shotgun. It just didn't work because Tech was running draw and sweep plays that did nothing to fool the opposing defense or allow the running back to get going downhill.

The result basically turned any run out of the shotgun into the "Waste a Down" play. A lot of people who follow this team wondered why the Hokies weren't running more zone-read option with Tyrod since he was already our most prolific runner on scrambles alone.

Saturday, we finally saw some true zone-read plays from the Hokies and they produced some of their best running plays against Central Michigan.

These screenshots come via VTPhreak4evr's fine work at HokieHighlights.net. The first play is Tech's second play of the game. 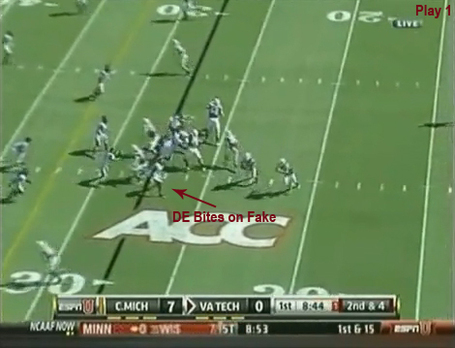 Here, Tyrod Taylor is flanked by Josh Oglesby and Darren Evans. As Tyrod goes to give the ball to Oglesby, the short side defensive end bites down toward Oglesby, so Tyrod keeps and races to the edge with Darren Evans as his pitch man. 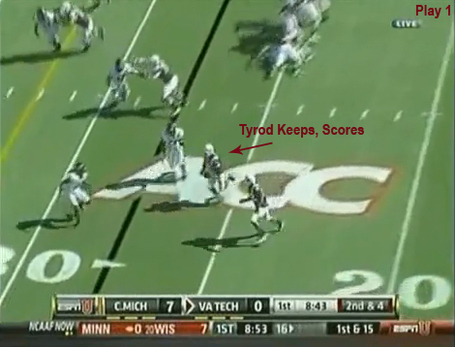 CMU actually had this play defended well, but Tyrod just out-runs the defender assigned to him who had the angle and races to the end zone for six.

Play 2 come early in the second quarter. This time, only one RB is in the backfield with Tyrod. 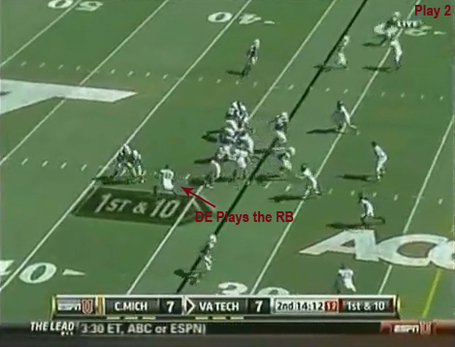 If the DE had crashed down to prevent the QB keep, then the ball would go to the back and the end result would probably be a big game since the opposing CB is playing soft coverage and there's a WR to block. However, the DE plays the give. 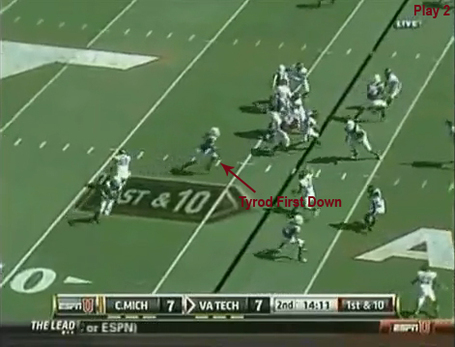 Tyrod makes him pay and runs up the middle of a first down. Good read by Tyrod and good blocking by the right side of the line. Tech would score two plays later.

The third and final play comes later in the quarter with the Hokies now up 10. Again, there's one back (Evans) with Tyrod in the backfield. However, this time the options are to give to Evans up the middle or for Tyrod to take the ball back and attack the outside. 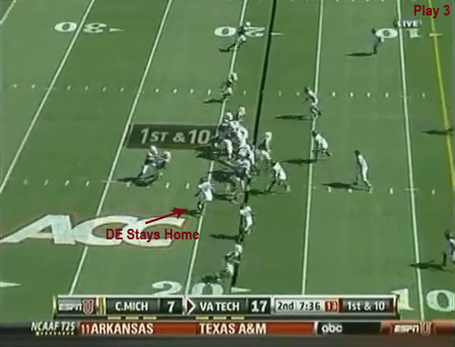 The right tackle leaves the DE and heads to the second level to deal with with the linebacker in his line of sight. This time, the DE plays the outside run option (and so does the CB). Tyrod reads this and gives the ball to Evans who has a convoy. 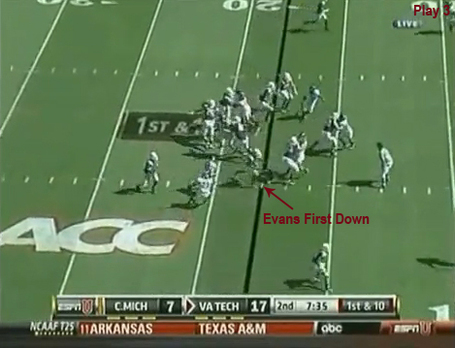 The DE and CB realize Tyrod doesn't have the ball and are left to chase Evans, who doesn't have to deal with the linebacker that the right tackle has neutralized. The result is a first down and Tech scores on the next play.

If Tech is going to run out of the shotgun, I'd prefer plays like this. Tyrod has shown that he's capable of making good decisions on zone-read plays and it gives the defense something else to worry about. The Hokies' best rushing attack is still out of pro and I-form sets, but if that's getting stopped consistently, this is a good back-up plan and the Hokies need to continue to run it and develop it.