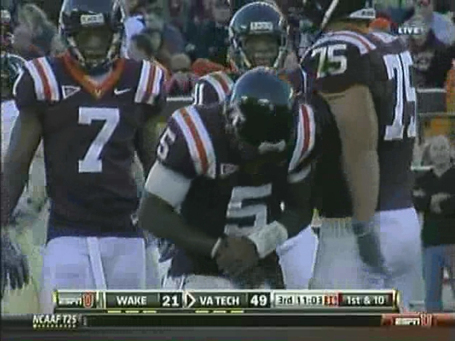 Senior quarterback Tyrod Taylor injured his right (throwing) wrist against Wake Forest, but will be fine according to head coach Frank Beamer. Norm Wood of the Newport News Daily Press spoke to Beamer about the splint Taylor is wearing on his right wrist and all indications are it's nothing to worry about:

The injury came in the third quarter of Saturday's win over Wake Forest after the Demon Deacons scored to trip Virginia Tech's lead to 49-21. Taylor had been pulled for back-up QB Logan Thomas to start the second half, but was reinserted after a Hokie punt and a 78-yard touchdown pass by Wake's Tanner Price.

Taylor returned to the game for Tech's second drive and scrambled for 22 yards on the second play. He was tackled from behind by Joey Ehrmann and came down on his right wrist. He was seen favoring the wrist after the play. 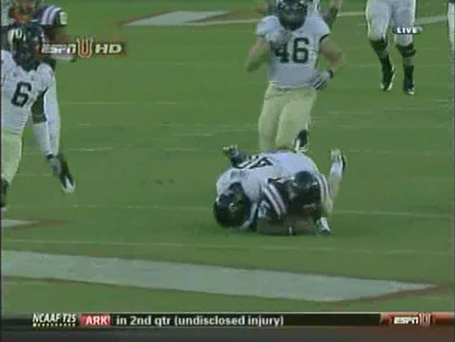 Why Taylor was put back in the game I'll never know. Maybe the coaching staff didn't want another punt by the Hokies to lead to momentum for Wake Forest, but at that point the defense was winning the battle against the Demon Deacons' offense and the Hokies were still ahead by 28 points. Did they really think Wake had a chance to come back in this game?

Taylor stayed in the game after the play and helped lead the Hokies deep into Wake Forest territory. He completed both of his passing attempts after the scramble, including an apparent touchdown to Jarrett Boykin that was wiped off by an offensive pass interference penalty. The Hokies settled for a field goal.

Putting Taylor back in the game was tempting fate and it almost cost the Hokies dearly. As it stands, he has a bruised wrist that's in a splint. I think we're lucky that's the extent of the injury.