Tight ends can get lost in the shuffle when an offense starts rolling. Most of the focus will go to a quarterback or running back and usually the receivers will get a good deal of time on the highlight reel. For the Hokies, the play of Tyrod Taylor and Darren Evans have indeed helped them rack up 182 points in the last three games, but senior tight end Andre Smith deserves his share of the credit.

Smith has been a big reason for Tech's recent offensive success, both through the air and on the ground. The tangible qualities are that he has 10 catches for 98 yards and four touchdowns, all of them in the last four games. But his run blocking has helped pave the way for Evans and David Wilson on the ground during Tech's six-game win streak as well.

The Duke game showed exactly what Smith means to the offense through his pass catching, run blocking and pass blocking.

In Tech's first two games, it was able to reach the end zone on only four of its 10 trips to the red zone. Since then, the Hokies have been to the red zone 28 times and have scored 20 touchdowns. Their only red zone trip that didn't result in points was against Wake Forest when they knelt down to run out the clock.

Smith has been a big reason for Tech's recent red zone success, in large part because of his abilities as a receiver. He's been nearly automatic in the red zone since scoring two touchdowns against NC State in the Hokies' come-from-behind win.

Against Duke, Smith scored the Hokies' first touchdown on a 14-yard reception. Here, Smith does a good job of finding the hole in Duke's coverage between the linebackers and safeties (all screen grabs are from vtphreak4evr's highlights): 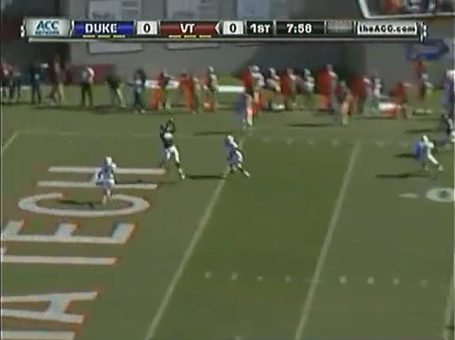 On Tech's next drive, Smith makes his second catch of the game at the Duke 10-yard line and then fights his way through a tackle to get down to the three. Smith has really improved his physical play this year and has paired Greg Boone's ability to run over people with his already solid route running: 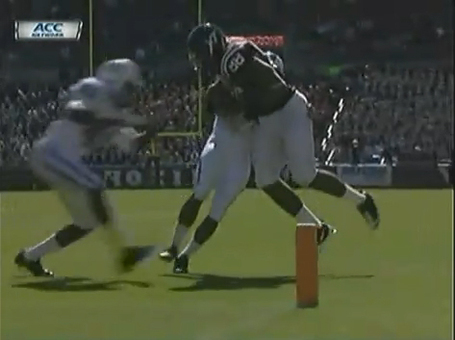 You can tell Tyrod really trusts Smith in the red zone, which is a big reason the Hokies have been successful recently. When in doubt, get the ball to No. 88.

While the offensive line has improved by leaps and bounds since a disastrous first two games, Smith is just as much responsible for the Hokies' resurgent ground game. On Tech's first drive of the game, Smith was a big part of this Darren Evans first-down run: 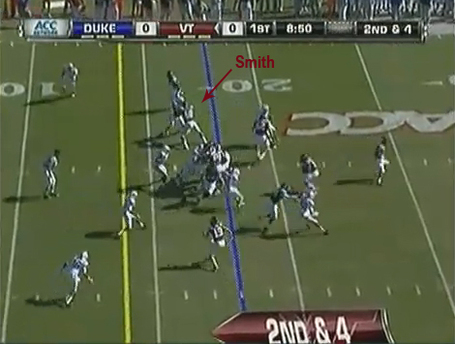 Prior to the snap, Duke's line shifted toward Smith's side, which is where the play was being run. Smith gets matched up against the Blue Devils' defensive end, seals the edge and pushes him past the first-down marker: 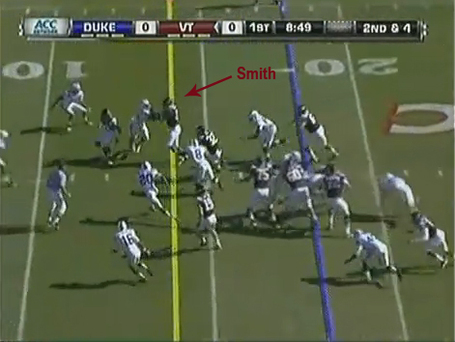 The result was a nine-yard run by Evans inside the Duke 10-yard line. On the next play, after a Virginia Tech penalty, Tyrod found Smith in the end zone for the first score of the game. It's hard to put numbers on it, but the fact is Virginia Tech's power run game has been a lot better when Smith's been on the field than when he hasn't of late.

Here, on Tech's first play of the second half, Smith again gets matched up with a Duke defensive end, Patrick Egboh. On the play, Duke only rushes four and Egboh isn't exactly Da'Quan Bowers. He came into the game with 2.5 sacks in 37 games and 18 starts. However, Smith still manhandles him: 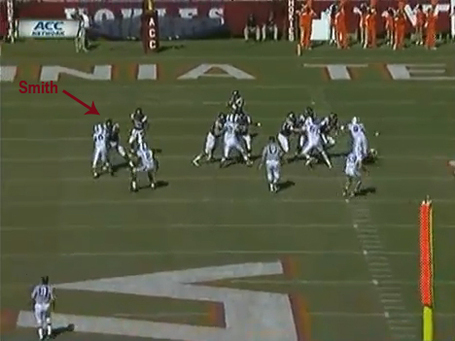 Yes, the Hokies ran max-protect against a four-man rush. But Tyrod having a nice, clean pocket with time to throw isn't exactly something we've been able to take for granted recently. At the end of the play, Danny Coale has a 27-yard reception and Egboh is closer to his own QB standing on the sideline than he is to Tyrod: 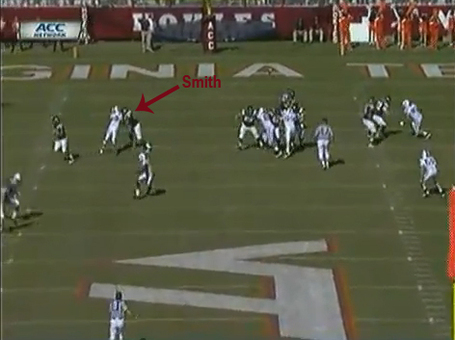 The Hokies' offense is rolling, albeit against inferior competition. But the progress is still pretty astounding and welcomed as they go into their upcoming three-game stretch. Smith is one of the main reasons Tech is playing as well as it is and we'll need him to continue to play at this level for the Hokies to return to the ACC Championship Game.