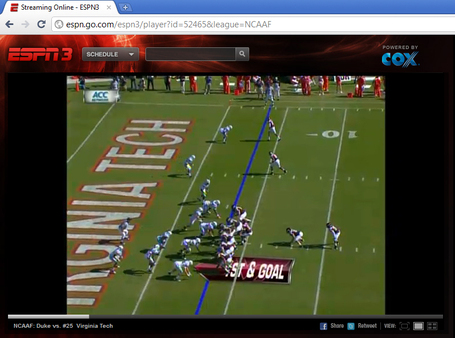 We'll be talking about the intersection of sports and technology here over the next few weeks, specifically how technology has helped enhance our sports experience. It's a perfect topic for me because without advances in technology, it would be next to impossible for me to follow the Hokies.

I was raised a Hokie, but I've always been far away from Blacksburg. I grew up in the early days of the Internet when the best case scenario meant waiting for the painfully slow dial up modem to pull up the box score and the worst case meant giving up on it and waiting for the newspaper the next morning.

Then there were the one or two glorious Saturdays a year when ESPN or CBS showed the Hokies. That all changed when my family got satellite TV.

With the satellite perched on the top of my parents' roof, I was able to get ESPN GamePlan got to see the Hokies six or seven times a year instead of one or two. I thought it couldn't get any better than that.

Over time, small advancements made it slightly easier to track Tech. I finally got a cell phone in high school and found a way to have Yahoo! send me the halftime and final scores from Hokie games right to my phone in almost real time. And with Internet speeds improved slightly, I could sit in front of a computer when Tech wasn't on TV and hit refresh every few minutes.

Finally, in college, ESPN360 (Now ESPN3) and satellite radio came along. The ability to watch an entire game online with minimal buffering or listen to Bill Roth in my car miles and miles away from Lane Stadium seemed impossible years ago. Now, thanks to these technological advancements, it's easy for a displaced fan to follow the Hokies.

As much as I complain about ESPN3, it's incredibly useful. Not only can I watch the Hokies live, but full replays are available online shortly after the game's over. The quality of the ESPN3 feeds have improved dramatically the last couple years and it's no longer a pain to follow a game online.

Earlier this year, when I was away from home during the James Madison debacle, I was able to come home and watch the game (twice) just a couple of hours after it ended. I was able to relive every painful play.

And satellite radio is a must for any fan. I had to drive eight hours for business the day of the 2007 ACCCG against BC, but every second of Bill Roth's pregame, game call and postgame got me almost all the way to where I was going. Last year, when I saw Lou Holtz was going to be calling our game against his son and East Carolina, I was able to sync up Roth's broadcast with ESPN's and was Holtz-free for the whole game.

Living far away from ACC country can be hard a lot of times, but thankfully it's not nearly as hard thanks to all of these advances. They've both spoiled me as a fan and have me excited for the future when it might be possible to watch a game broadcast on my phone or any other way the future holds.

How has new technology helped you follow the Hokies? What crazy things did you do in the days before pay per view, ESPN3 and satellite radio to get a Virginia Tech score or even see the game?