Share All sharing options for: Help the Virginia Tech Effect Shirts Not Completely Suck This Year 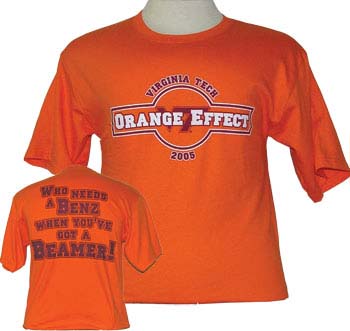 What started off as a good idea has become a pretty lame one. Since Virginia Tech started Orange Effect in 2002 and Maroon Effect in 2005, we've seen some good slogans for the mass-produced shirts ("Time to Go to Work!") and we've seen some absolutely atrocious ones ("You Can't Take the VT Out of Victory").

There are a couple of reasons the shirt slogans have gotten lame. The first is that they don't allow profanity on the shirts. The second is that apparently not enough people submit ideas. HokieEffect.com is where you can go to submit your own Effect slogans which will later be voted on. Whether you want to be clever or just make fun of how horrible the shirts have become, go ahead and give them your suggestion. The slogans certainly can't get any worse, I don't think.

The two suggestions I made were gleaned from The Twitter. "It's a 114 Year-Old School Cheer" (@briancolligan) and "Shirt Effect!" (@akulawolf). I challenge you to do better. Leave your best Effect slogans in the comments section and if I get enough we'll have our own vote.