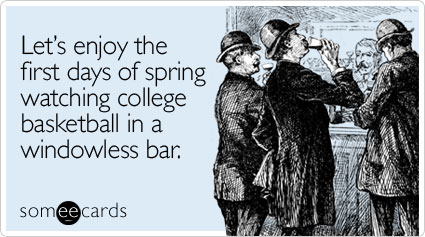 The Hokies were expecting a frilly, glittery invitation to the Big Dance from the Selection Committee on Sunday. Instead, they got a Someecard that said, "Sorry your non-conference SOS sucks because no legitimate commercial airline flies into Roanoke."

Or something like that. There's a reason people more creative than I work for that Web site. Anyway, on to the links. Most of these were accompanied by a file photo of Seth Greenberg looking haggard.

Exclusion shouldn't surprise Hokies (Aaron McFarling)
"Go ahead: Blast the NCAA tournament selection committee. Rip Jay Bilas for saying on television that Virginia Tech didn't do enough. Laud Dick Vitale and Bob Knight -- the same Knight who advocated expanding to a ridiculous 128-team field at this time a year ago -- for sticking up for the Hokies, for saying they got jobbed, for pointing out the flaws of others who got in instead of Tech on Sunday night. Feel better? Didn't think so. All noise. Worthless noise."

Same song, no dance: Va. Tech left out of NCAA tournament (Mark Berman)
"After playing one of the weakest nonconference schedules in the country, the Virginia Tech men's basketball team once again had an unhappy experience on Selection Sunday. The Hokies were relegated to the NIT for the third straight year, becoming the first team with a 10-6 ACC record to be left out of the NCAA tournament."

Somber Sunday: Hokies left out of Big Dance (Kyle Tucker)
"Once upon a time, I was hit below the belt with a line drive off a baseball bat. I’d imagine that’s an apt description of how Virginia Tech coach Seth Greenberg felt when his Hokies were left out of the NCAA tournament field that was just announced."

Virginia Tech misses NCAA tournament for third straight year (Darryl Slater)
"Just now on CBS, the selection committee’s chairman, Dan Guerrero, was asked what kept out Illinois, Tech and Mississippi State, which went 2-5 against the top 50 and was also on the bubble. He mentioned, without talking specifically about Tech, non-conference strength of schedule and playing an unbalanced conference schedule."

Virginia Tech is left out of NCAA tournament (Mark Viera)
"Despite this seasons dismal at-large pool, the Hokies resume was not deemed strong enough to overcome one of the worst nonconference schedules in recent memory, at 339th in the Ratings Percentage Index. Two of their three quality wins were against marginal NCAA tournament teams in Clemson and Wake Forest."

Tech takes No. 1 seed in NIT (Collegiate Times)
"Nearly every basketball analyst pointed at Tech’s out of conference schedule strength — ranked around No. 339 nationally — as the main factor for its NIT relegation. Greenberg disagrees with the national bashing of the schedule his team played, and doesn’t appear to regret the games he scheduled."

Another Snub (The A-Line)
"Seth dearly loves to play the victim and, given his track record, has had numerous opportunities to become really good at it. He was at his best on ESPN, defending his indefensible schedule, whining that nobody wanted to play him and, of course, campaigning for an NCAA field expansion that would finally make him a big tournament coach. Who knows, he might get his wish."

Looking at VT’s Undoing: Their Out of Conference Schedule (Tech Hoops)
"While I won’t question VT’s schedule, the one thing that stands out to me is – where are the Virginia teams? The Hokies played just two in-state teams out of conference – longwood and vmi. Those two teams also happen to be the two lowest rated RPI teams in the state, at 285 and 309 respectively. Meanwhile, richmond had a RPI of 22 and old dominion at 27. Both made the Big Dance."

You Can't Spell "Virginia Tech" without "N-I-T" (The North End Zone)
"But at some point, Seth needs to man-up and take responsibility for this. All we've heard from him thus far has been whining. We're still waiting for him to say, "It's my fault. We do this shit every year. We lose winnable games, especially down the stretch. And it's on me." Maybe not those words exactly, but you get the point."

Virginia Tech Hokies Gets Left Out of NCAA Tournament (VT Fan)
"Another selection show has come and gone and for the third straight season, the Virginia Tech logo never appeared on screen. The Hokies had amasses a quality resume with a 23-8 overall record, a 10-6 mark in conference play but perhaps the 344th ranked non-conference schedule was the anchor that officially kept the Hokies from reaching their ultimate destination."

Belated Initial ACC Bracket Thoughts (On The B.Rink)
"I will maintain–no matter what you say about strength of schedule and the unbalanced schedule in conference–Virginia Tech is a tournament team. I don’t care if you play Virginia, BC, and NC State for all flippin’ 16 games of the ACC schedule–IT’S HARD TO WIN 10 GAMES IN THE ACC! The Hokies did enough–the committee was off its rocker, again."

NIT Pickin': State In As A 6-Seed; VT and UNC In As Well (Yet Another...)
"Speaking of Virginia Tech, they weren't done any favors being one of the first teams left out of the NCAA Tournament. They landed in the statistically most-difficult region in the tournament. Their opening round game against Quinnipiac should be a breeze, but beyond them lie either UConn or Northeastern, two teams that could easily beat the Hokies on the road."

Did you say you were hungry for MORE UConn men's basketball? (The UConn Blog)
"I am not happy with any of this. But here we are. UConn's 17-15, having blown in spectacular fashion every chance it had at making a run at a tournament that matters. They've put us all in this situation. We may as well make the best of it. I'll never not watch a UConn basketball game, and hey, maybe if everyone decides to just back off and let Kemba do his thing, the Huskies might win a game or two."

William & Mary: UNC Built, and Ready to Win (Carolina March)
"Never say the NIT doesn't have a sense of drama. Not only does UNC's first round opponent already have two wins against ACC teams, they also have two UNC alumni on the coaching staff. Johnthan Holmes, an assistant, was on the Heels' bench from 1999 to 2003, but it's the head coach you really want to be concerned about."

Super Conferences: Financial Independence (BCS Evolution)
"The major issue is accountability. If the athletic departments are financially independent, then they are also less answerable to the institutions they represent. The board of directors and university presidents would still have control of hiring and firing AD's, but the cash would flow the other direction."

Does Greensboro Provide Too Much Of A Home Court Advantage? (BC Interruption)
Brian and Jeff takes time from reading the city's free alternative newspaper with Mrs. Brian and Mrs. Jeff trying to find a cool new place to eat for date night before saying fuck it and going to Chili's: "Sure it helps to have the crowd on your side when you are trying to win the ACC Tournament but we can forget who exactly those North Carolina based teams are. Clearly, Duke and North Carolina are the best teams in the league and you would expect them to have the most championships regardless of where the event is being played."

A World Without the Big East: Welcome to the Super-ACC (Testudo Times)
"Hey, everybody's doing it: expansion. The Big Ten started the craze, and the Pac-10 has since joined in on the fun. You can bet that if the two major conferences around them start to expand - and probably cherry-pick some members - that the Big 12 will respond by adding a team or two of their own."

ACC Television--An Absolute Joke (Shakin The Southland)
"Let's go ahead and give a nice shout-out to the ACC for officially pissing me off once again. I live in the great state of South Carolina and cannot watch the ACC Tournament. Un-freaking-believable. The premier basketball conference in America, and I am blacked out on ESPN (as is the rest of the state) and the Raycom sports network does not have an affiliate in this area."

ACC Tourney Reaction (From The Rumble Seat)
"Frankly, I can't say that I approve of the job Paul Hewitt is doing of coaching our players. You all know why I think that: we turn the ball over, we can't run consistent offensive sets throughout an entire a game, we lose our man on defense all the time because we are switching all the time, and of course we can't run an inbounds play at all."

Painful Realization (Blogger So Dear)
"I do not typically do this and I'm not one to throw players or coaches under the bus. I am not a huge fan of Coach Lobo but I wasn't the first to throw him on the chopping block and still from time to time think that Lobo can be salvaged as a member of the coaching staff. I say this with a heavy heart because of what he means as part of the Prosser era, but it is time for Dino Gaudio to be fired and replaced as the Wake Forest basketball coach."

Our Baby Backs? Yeah, They're Alright (The 7th Floor)
"Our little Georgian friend, high school senior Storm Johnson, waved hello to Miami with a spectacular 52-yard run up the left sideline before Demarcus Van Dyke chased him down at the 10, and on another carry he broke out for a 29-yard gain up the left. He notched a six-yard touchdown run and caught two balls for 14 yards."

Jimbo Fisher Press Conference News & Notes (Tomahawk Nation)
"Air Force begged out of its contract with FSU for the 2011 and 2012 games. That's great news because FSU was going to drop them anyhow. This is great news. Now FSU can schedule a home game that will make money for the program. I suggest North Texas."