Conference Expansion, Jean-Jacques Rousseau and You

Share All sharing options for: Conference Expansion, Jean-Jacques Rousseau and You 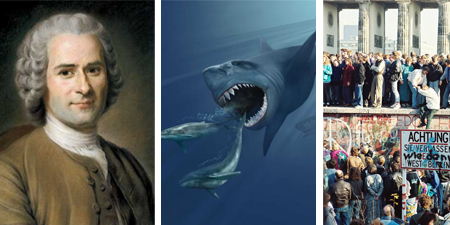 It's a trippy time to be around the college football blogosphere and not just because it's 4/20, man. It's because Big Jimmy D. and the Big Ten big-wigs are about to put an end to college football as we know it, starting in 2012. Whoa, 2012, man! What if that movie was really about college football, man?

What if the Mayans weren't really talking about the physical earth like we know it? What if it was all just a metaphor for callllllage footbawl? People are talking about some crazy stuff, man. Like Ulta-super-mega Conferences. Conferences so big you can see 'em from space.

I mean, we've got the Big Ten about to devour the Big East like some kinda college football Megalodon, forcing Mike Slive, Swoffy and That Tennis Guy to do the same. And if Gray Lady Guy is correct, they're all four just going to break off like East Germany and put up a big wall between us and the Mountain West dudes. We'd be the oppressors, man. And that just ain't cool.

That's why I've got a much, much better alternative to conference expansion. Let's just all run around naked in a forest with J.J. Rousseau!

Whoa, man, guess I dozed off for a bit. But, naw, man, we just go out there and have fun as one big football-playing family. Screw the conferences, man. We don't need conferences. We just need each other.