We continue our look at touchdown rates by switching to the defensive side of the ball. Where offensive numbers can sometimes be skewed by philosophy, I think defensive touchdown rates give a much clearer look to how a team performed. All stats are from conference games only and are taken from CFBStats.com.

Again, I had to take out the sacks in rush plays and add them to pass plays, just like I did for the offensive numbers this morning. Boston College, Virginia and Virginia Tech tied for fewest passing TDs allowed, but faced more passes so it wound up with the highest pass per touchdown rate (good when you're on defense) through the air. On the ground, Virginia Tech and Clemson tied for most rushes per touchdown. 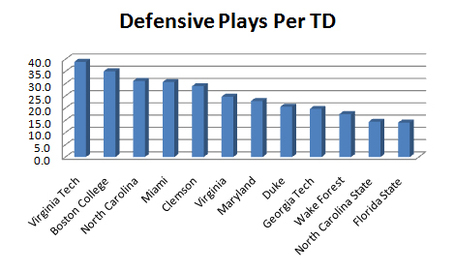 The Hokies had the highest play per touchdown rate overall in ACC play. They faced the fewest plays and gave up the fewest touchdowns, putting them ahead of Boston College and North Carolina. Just like on the offensive chart, Georgia Tech is in the bottom third in plays per touchdown on the defensive side. Some of this has to do with the Jackets facing the second-fewest plays on defense.

Hard to believe, but the Hokies ran the second-fewest plays and faced the fewest plays in conference play. That will lead to some quick games.

These numbers and defensive yards per play from last year match up pretty well. Miami does jump up from No. 6 in yards per play to No. 4 in plays per touchdown. Why? You'll find out Friday afternoon when we look at red zone stats.