Yesterday we looked at how often ACC teams got into the end zone in 2009. Today we'll take a look at the opposite end of the spectrum. After the jump, the stats on how often ACC teams coughed up the football. All stats are from league games only and the raw data comes from CFBStats.com.

A year after its well-documented trouble with fumbles, Georgia Tech came out and ran the second most run plays for each fumble lost in the ACC in 2009. Miami was the only team head of the Jackets in that category. Surprisingly, Virginia ran the most pass plays per interception thrown in the league. Meanwhile, the Hokies stayed steady in both categories. 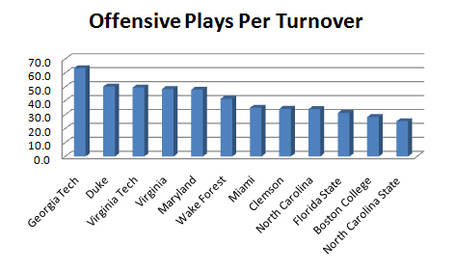 The Hokies and Hoos may have tied for fewest interceptions and fumbles combined, but Georgia Tech and Duke ran a lot more plays and therefore had lower turnover rates. With the loss of Thad Lewis, it will be interesting to see how fall Duke falls in this ranking.