Earlier we saw which offenses had the highest turnover frequency in the ACC last year. Now, we take a look at the defensive side of the same stats. All raw data comes from CFBStats.com.

For the most part, total turnovers and plays per turnover rankings follow suit. However, Miami and North Carolina both make jumps because of how few plays they faced. Clemson had far and away the fewest passes faced per interception, though UVa wasn't too shabby. On the ground, Miami recovered a fumble for every 33.6 rushing plays they faced to lead the ACC with Virginia Tech right behind them.

I decided to leave sacks in with rushing plays on this one since sacks often times lead to fumbles. Plus it's impossible to throw an interception on a play in which a sack results. 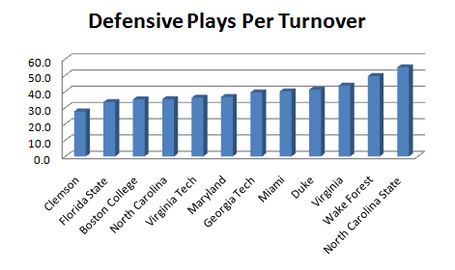 Clemson forced six more turnovers than anyone else during league play, but the Tigers' defense also saw a lot more plays than anyone else. In they end, they still forced turnovers at the highest rate in the ACC, but Florida State isn't as far behind as it seemed at first. FSU's defense was similar to NC State's offense. It gave up a lot of points, but also forced a lot of turnovers.

By the way, when FSU and NC State met last season, the game saw 87 points and four turnovers.

With the exception of Maryland, the graph is nearly divided by bowl teams and non-bowl teams. the worst of the worst the conference had to offer all found their way to the back of the line in turnover rate (and the ability to force turnovers in general). Maryland's defense wasn't completely gawdawful last year, which is why there is some hope for the Terps in 2010.