Today we're taking a look at loss rates. The offense is up first and after the jump you'll see which teams gave up sacks least often and which team gave up tackles for loss least often in the ACC. Whether or not these stats can be used as a good judge for an offensive line's ability to pass or run block is debatable, but I at least found Virginia Tech's stats interesting. As always, stats are from conference games only and the raw data is pulled from CFBStats.com. 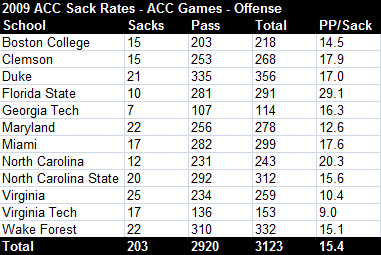 At first it would appear Virginia Tech did a decent job of keeping Tyrod Taylor upright in 2009. The 17 sacks given up by the Hokies was tied for sixth in the conference. To the naked eye, that seems like an improvement over the 26 sacks they gave up in 2008. However, Tech had the fewest pass attempts of any team that doesn't run an option-based offense. 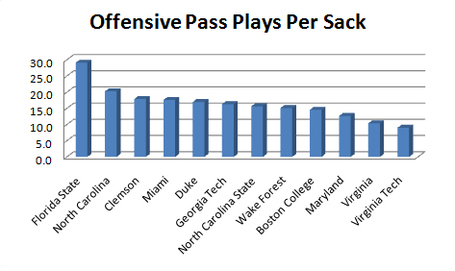 Yup. Tech gave up a sack every nine times its quarterback dropped back to pass, a truly staggering number. In 2008, it was every 8.7 times. Taylor appears primed to have a breakout season in 2010 because of how he played down the stretch last year and how he played during the spring. But if Taylor is going to reach his potential he's going to have to be kept upright. A lot of people felt Virginia Tech's pass protection was bad last year and this stat certain lends some credence to that.

However, I thought the Hokies did a nice job with run blocking last year. So let's see how their tackle for loss rate was. 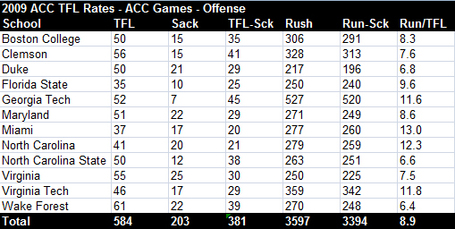 The formula for this one is a little tougher because of how the NCAA keeps stats. Sacks count as tackles for loss and as rushing attempts, so they have to be removed from both numbers. So the equation is basically (Rushing Attempts-Sacks) / (TFLs-Sacks) = TFL Rate. Easy, right? Right. 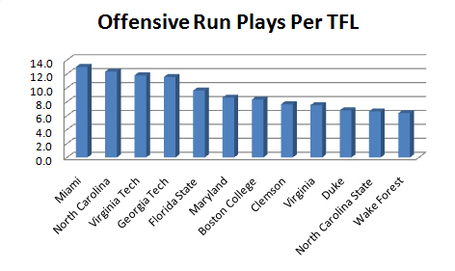 Hey, Tech didn't do so bad at that. Sure, the offensive line isn't the only factor in how often a ball carrier is brought down behind the line of scrimmage, but the Hokies were still third in the league in the category. The surprise in these stats are North Carolina, whose offense everyone points to as its potential downfall. UNC didn't give up many sacks or TFLs last year and returns 72 percent of its offensive line starts from 2009.

These stats are by no means a definitive evaluator of O-line play. Plenty of factors go into sacks and TFLs, like the fact that sometimes Tyrod can hold the ball too long. But at some point you have to give the O-line its share of the credit or blame of its ability or inability to keep a quarterback off the ground and get a good push on running plays.