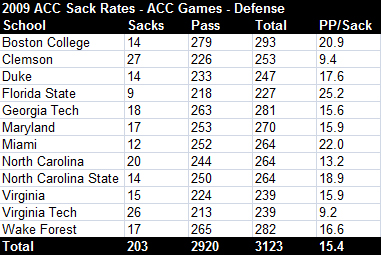 For the second consecutive year, the Hokies are at the top of the ACC in sack rate. Couple that with them being last in offensive sack rate and it was tough to be a quarterback in a game in which Tech was involved. FSU, meanwhile, had the fewest offensive and defensive sacks per pass play in the league. Go figure. 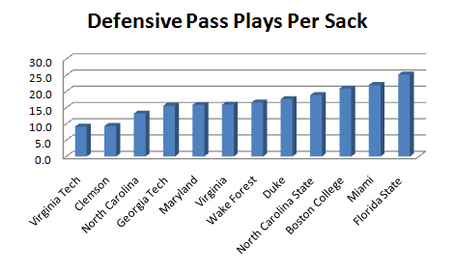 The Hokies and Tigers had far and away the best defensive sack rate in the ACC last year. Sack rate is usually a good indicator of how good the Virginia Tech defense is playing because it's predicated on getting pressure on the quarterback. There's a lot of pressure on the Hokies' cornerbacks in their defense. Forcing the QB to make quick decisions helps them out a lot.

Seeing Miami and FSU at the bottom of this graph is pretty surprising because the Canes and Noles usually have fast defensive ends capable of getting to the quarterback quickly. Last year, FSU was No. 2 behind Virginia Tech in defensive sack rate thanks in large part to defensive end Everette Brown. The Noles faced the second-fewest pass plays last year, but their sack rate still struggled thanks in part to the play of their defensive ends.

Don't expect the Canes and Noles to be at the bottom of the league in sack rate for long. 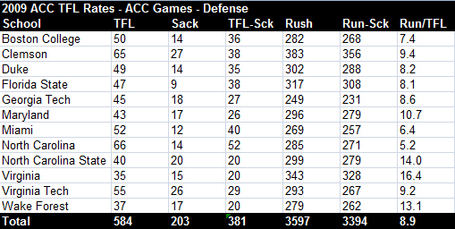 Once again, you have to take the sacks out of both TFLs and rush attempts to see the TFL rate on rushing plays. While Clemson had a decent number of TFLs last year, it also faced a lot of run plays (it DID play Georgia Tech twice). UNC, however, had a huge number of TFLs no matter how you look at it. 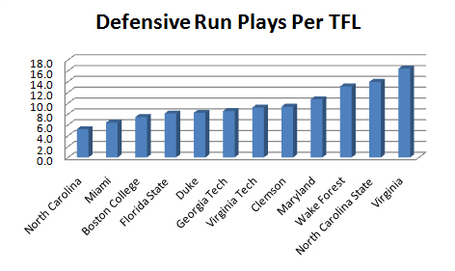 The Heels led the league in TFL rate by a decent margin, thanks to one of its better front sevens. What's interesting is Boston College. In 2008, the Eagles had Ron Brace and B.J. Raji and finished the year with a TFL for every 7.6 they faced. But in 2009, without Brace and Raji, they still improved that number slightly.

Virginia Tech's undersized defensive tackes, coupled with a mid-season injury to John Graves, probable contributed to it finishing in the bottom half of the league in tackle for loss rate last year despite being third in the league in rush yards per play during ACC games.

Looks like this chart pretty much coincides with which teams went to bowls and which teams ... wait, what on earth is Duke doing at No. 4? Maybe there's hope for the Devils yet.