Traditionally, teams are ranked on their performance in the red zone based on percentages. For instance, last year in ACC play, Boston College scored on 91.7 percent of its trips to the red zone, ranking it first the league. However, Florida State led the league in touchdown percentage in the red zone at 69.7 percent. BC was sixth. Personally, I think a better evaluator of red zone efficiency is points per trip. Anything that rewards teams for actually getting into the end zone instead of settling for a field goal is better to me. Those numbers (for ACC games only) are after the jump with raw data from CFBStats.com.

To get points per possession I multiplied field goals by three and touchdowns by seven, then divided by red zone possessions. Yes, I'm sure there was a missed extra point here and there, but I didn't have time to look those up and kickers don't count as people anyway. In the end, the one point that was missed probably isn't enough to skew the data significantly. Using this formula, 7.0 is perfect. 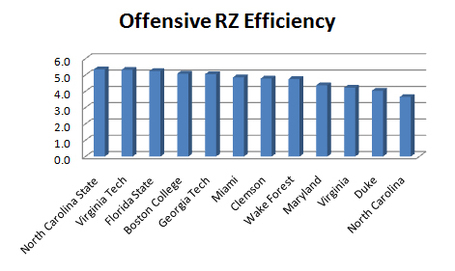 Boston College, who led the league in red zone percentage, was fourth in efficiency and Florida State, who led in touchdown percentage, was third. Virginia Tech comes in second, which is a huge improvement over what we have come to expect from the Hokies in the red zone.

The best red zone offense in the league was NC State, by hundredths of a point over Tech. UVa is the team that gets punished the most for settling for field goals. The Hoos were third in the league in red zone scoring percentage, but 10th in points per trip. UVa made field goals on 50 percent of their red zone possessions in conference play.