This afternoon we look at red zone efficiency for ACC defenses in conference play. The chart and graph are after the jump, with raw data from CFBStats.com. 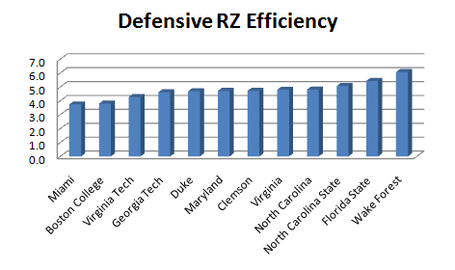 The Canes edged out the Eagles with the Hokies coming in third. Wake Forest, which gave up 23 touchdowns in 28 red zone possessions, finished in last by a decent margin. Holding teams to field goals helped Clemson out in these rankings. The Tigers were 10th in the ACC in opponent's red zone percentage, but seventh in points per possession. FSU meanwhile, dropped from 6th in percentage to 11th in efficiency thanks to giving up 27 touchdowns in 37 trips.