Virginia Tech's APR Scores Improve but Are Still Below Average

Share All sharing options for: Virginia Tech's APR Scores Improve but Are Still Below Average

The NCAA released its Academic Progress Rates Wednesday and the big news for the ACC is that no ACC institution faces penalties in any sport. That includes Virginia Tech, which showed improvement in the two glamor sports, football and men's basketball.

The NCAA uses APR to evaluate how well players are doing in the classroom. A score of 925 represents a 50 percent graduation rate and teams falling below that line are subject to penalties from the NCAA, including reduced scholarships. This year, four programs lost scholarships due to poor performance: Colorado, Florida Atlantic, Idaho and New Mexico State. They are all among the 11 schools whose multi-year APR is below 925.

The Hokies 956 represents a big improvement for the football team, but they're still in the bottom third of the ACC. 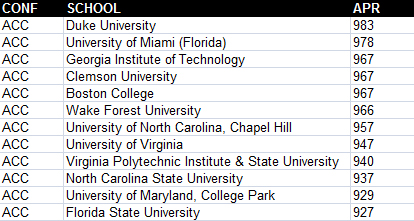 That 940 is tied for 73rd among the 120 FBS programs according to my math. So the program is making improvement, but is still in the bottom half of college football's top division. I think Tech fans should be proud of the progress being made by the football program, but shouldn't be satisfied until it's at least in the top half of FBS.

Getting into the top half of the ACC will probably be a little harder, mainly because the ACC had the highest average APR in football among its member institutions. That's something the conference should be really proud of. 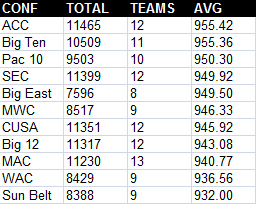 The ACC is out-performing the other FBS football conferences in the classroom according to the number the NCAA uses to judge such things. Whether or not the APR is the best or even a good way to measure academic progress is up for debate. But I think we can all agree it's light years better than the old GSR system.