Share All sharing options for: A College Baseball Hater Goes to Omaha

I like to think I have an open mind. I'm willing to have any and all preconceived notions I have demolished by actual experience. Last year, I went to Atlanta thinking the Crimson Tide faithful would be among the worst college football fans I'd ever have to deal with and I couldn't have been more wrong. Hell, there's even a Wahoo who I consider to be a decent human being.

So it was with an open mind that I traveled to Omaha, Neb., to see the College World Series with Winfield of From the Rumble Seat, Willy Mac of Block-C and a friend of mine who, since he's from Seattle, we'll refer to as "Pearl Jam" because Pearl Jam is awesome. My mind was open to the idea that college baseball wasn't a complete abortion and that its national championship tournament would be worth the drive.

No matter how you choose to drive to Omaha, the trip is likely to be surrounded by flat (that's right, I just used flat as a noun) with corn and farmland as far as you can see. It's far from the most exciting drive in America, but at least the scenery will occasionally change, unlike a lot of the drives in the South where the highway is just lined with trees for hundreds of miles.

It's one of those drives one route can actually take an hour less, but FEEL two hours more than an alternate route. Lubbock, Texas, is the same way but with cotton instead of corn.

But when you finally get to Omaha, the payoff is worth it. You exit I-80 and go South on 13th Street, slowly creeping up a hill in the middle of gridlock. But when Rosenblatt Stadium comes into view, it's easy to be taken aback by the sight because there is just people everywhere: In the stadium, on the hill outside the stadium, on the streets, lining the streets. Just. Everywhere.

Rolling down 13th, past Rosenblatt itself, you see that you've stumbled into College Sports' Lost Party. Every bar and restaurant has a beer, merchandise or beer and merchandise tent set up for consumption. The ballpark is in a residential area so every lawn and driveway has been turned into a temporary parking lot and tailgate.

All you want to do is to park and get the hell out of your car as quickly as possible so you can take part in the festivities. 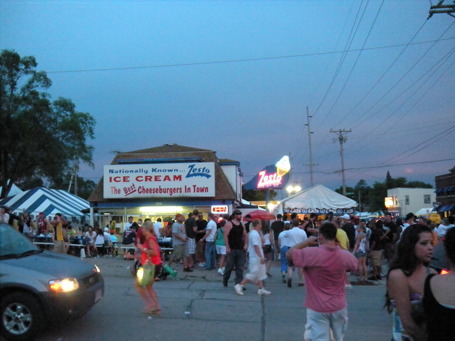 This is the one place where college sports still have the college atmosphere. It's the one place where the fans make the rules and Corporate America has to abide by them. Most of the prime tailgating locations along 13th have been occupied by the same groups for the better part of three decades. They made deals with the property owners long ago and simply keep coming back under the agreement that the same spot will be saved for them next June.

This isn't like the Final Four, Frozen Four or BCS Championship Game where the championship is held in a large pristine stadium or arena. Where the prime seats are given to sponsors who get their choice of where to put their tents in the parking lot or the area around the venue.

The CWS is held in a minor league ballpark, the home of the Pacific Coast League's Omaha Royals and put right in the middle of a residential area. The fans control the parking and the party and that's why the fun has to end. Look, I can see why the NCAA (and the Royals) want out of Rosenblatt. The place really is a dump. But the response from the college baseball fans I talked to was universal, "Yeah, but it's OUR dump."

Next year, the College World Series moves to the new TD Ameritrade Park Omaha (hey, at least they let them put the word "Omaha" in there) which is about four miles North of Roseblatt, still on 13th in downtown Omaha. It's not surrounded by houses or the zoo, it's surrounded by hotels, parking garages and chain restaurants. The park, the parking and the party will officially be sponsored in 2011 as the NCAA will finally wrestle control of its Lost Party from the fans. 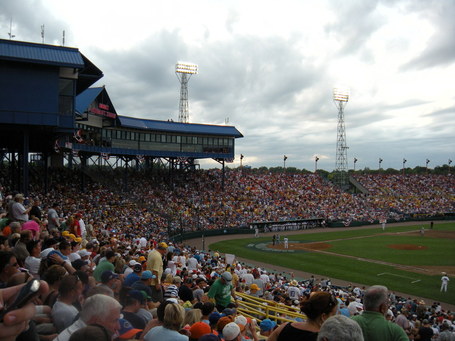 What happens to the atmosphere will be the biggest question facing the event. It was made by college baseball fans and the city of Omaha, who took ownership of it and made it what it is today. Will the die-hards stop coming back? If they do, it will be a shame. The atmosphere for the College World Series is a lot like the Frozen Four in that the people there REALLY care about the sport they're watching. They're almost fans of the sport first and their schools second, which for the most part is unlike the Final Four and BCSCG.

The crowd at the CWS made college baseball fun to watch for a non-college baseball fan. The outfield bleachers are the main attraction, inhabited by people who paid $10 ($10!) and stood in line for hours to get into the general admission seats. They yell at each other, yell at the people in reserved seats and try to keep beach balls out of the hands of security. They still know the game and appreciate good plays, but they are the primary suppliers of fun at the CWS.

The guys in the bleachers were needed for the first game Pearl Jam and I went to, a nearly four-hour game between UCLA and Florida. If I started to find myself bored during a pitching change, I could always look over and see what they were doing. It would be a shame if those $10 GA tickets disappeared next year as some at the tailgates speculated. It would price a lot of fans out of the CWS and be a huge blow to the game atmosphere.

The baseball itself wasn't spectacular. I saw a lot of unnecessary steps off the rubber, walks and catchers with bad arms, but I did see college baseball at its best. I also saw Florida's centerfielder make one of the best defensive plays I've ever seen, a sliding over-the-shoulder catch at the warning track. At this level, the baseball itself was more than tolerable.

The people and the atmosphere were what was spectacular. No matter where we went we ran into people who wanted to talk to us, drink with us and talk baseball with us. The CWS was one of those rare sporting events that's more of an experience than anything else.

I came away so impressed with the CWS that I'm already making tentative plans to be there next year, hopefully with Winfield, Willy Mac, Pearl Jam and a host of others. The only thing that remains to be seen is whether next year's experience can come close to matching this year's.