Share All sharing options for: The Virginia Tech Hokies' Nike Pro Combat Uniforms Will Likely be Black and Anger Traditionalists

The Hokies' new Nike Pro Combat uniforms will officially be unveiled Wednesday, along with the uniforms for nine other teams. Already, several photos of the new uniforms have leaked on blogs and Twitter, including pictures of the jerseys already on sale from jmrgn and The Key Play. Nick Becton even sent out a picture of the new jerseys on TweetPhoto.

Most likely, the black jerseys will be paired with black pants and a black helmet and look something like this from a poster Kyle Tucker found on the series of tubes: 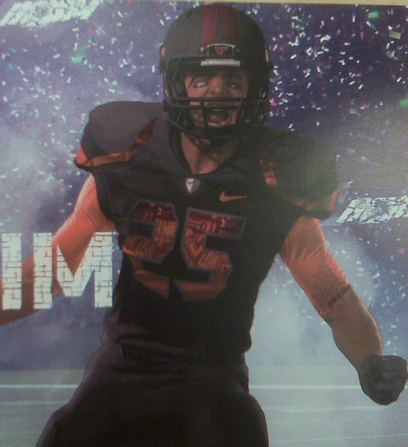 These jerseys, which a lot of people have already expressed disapproval towards on Twitter, will be worn for at least one game this year. And if an e-mail I received from the University Bookstore is any indication, they'll be worn against Boise State in the opener.

The e-mail, promoting a "Beat Boise Sale" invites people to "look like the team" and get "a first look at the new Nike sideline apparel." It also says the jerseys will be available on Sept. 1, which conveniently is the same day Nike is unveiling all of the Pro Combat jerseys.

Boise State will also be getting new jerseys from Nike, but I haven't seen anything suggesting they'll be wearing them against the Hokies.

As for the jerseys themselves, I really don't know how I feel. The white ones last year did wind up growing on me, but black isn't one of our colors. Whether you like them or not, they'll look cool if they're worn during a night game, especially the color-change numbers.