So What Did Work for Virginia Tech's Offense Against James Madison?

Share All sharing options for: So What Did Work for Virginia Tech's Offense Against James Madison?

If Saturday's viewing of Virginia Tech's historic loss to James Madison wasn't enough, I subjected myself to more pain and suffering by watching the game again and charting every offensive play. Like Richard Dreyfuss in Close Encounters of the Third Kind, I've kind of become obsessed with this game and our colossal failure in it. If I start making sculptures of Mickey Matthews throwing his jacket out of mashed potatoes, that will be your cue to have me committed.

Tech managed to out-gain JMU, 362-235, and averaged six yards per play, compared to the 4.8 yards per play it had against Boise State. What killed is was turnovers, inconsistency and getting into third-and-long situations. The Hokies faced third-and-six or longer on six of their 10 third downs and third-and-five on another.

Tech ran a pass play in every one of those situations, including four scrambles by Tyrod Taylor, and picked up the first down on three of those plays. One play we ran on third down exemplifies one of my frustrations with the play calling. Late in the third quarter, we faced third-and-six at the JMU 29. Tyrod's pass to the left went to Danny Coale, who was stopped short of the first down marker and then slipped on the wet grass making the catch. 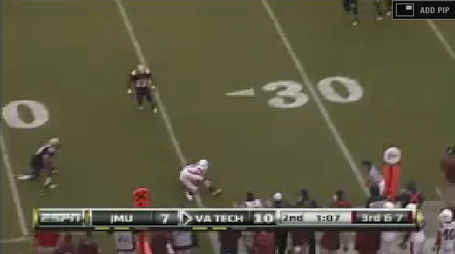 Why on earth would you have a receiver, especially the receiver with the surest hands, run a route that is short of the first down? Because Coale wasn't able to run after the catch we had to settle for a field goal. On the three third downs we converted on pass plays, two of them were scrambles by Tyrod.

As it turns out, the scramble was Tech's most effective "play" against the Dukes. Tyrod scrambled eight times for 72 yards. However, it was pretty much boom or bust when Tyrod decided to tuck and run. Four scrambles went for 12 yards or more while the other four went for three yards or less.

The Hokies ran three basic sets against James Madison: One back, I-Formation and shotgun. They varied their personnel out of those sets, but didn't do anything too spectacular. It almost seemed as if they were doing all they could not to show anything on film for future opponents.

Below is how Tech did on run and pass plays out of those three sets. Note that Tyrod's scrambles have been included with the pass plays to separate them from true running plays.

In the pass plays, Tyrod scrambled three times for 15 yards in one-back sets and five times for 57 yards out of the shotgun.

Now I'll break down the running plays from the JMU game by left, middle and right. Again, these do not include scrambles by Tyrod.

Prior to looking at these numbers, it had seemed to me that we'd had a lot more success running to the right side of the field. That really wasn't the case against JMU as only three runs tot he right went for more than four yards. However, we were more consistent to the right side and only four of these runs went for less than three yards, including Darren Evans' fumble on our last offensive play.

The runs to the middle, between the two guards, include four gains of 10 yards or more, but also six runs of less than three yards, including a quarterback sneak for a first down.

Tech's personnel sets were also indicative of what play was going to be run. David Wilson was out for three plays on Tech's third possession of the game and ran the ball three times. Two of his carries were for marginal gains, but he was able to pick up 17 yards on a well-designed and executed counter play that saw him get a key block in the backfield.

Tech also liked to put fullback Kenny Younger in the game and line him up at the end of the line, just offset from tight end Andre Smith. Tech did this eight times in the game, including six times with Ryan Williams lined up behind Tyrod. Of these six plays, Tech ran toward Smith and Younger four times, ran one play to the other side of the line that was stuffed and ran one play-action pass.

That pass came in Tech's first drive of the game and netted a 16-yard pass on first down. It was a well-called play because we had run out of the same set on first down twice during the drive and then caught them off-guard with play-action on that play. Two plays later, we scored our only touchdown of the game.

However, Tech never really set up plays like that the rest of the game. And it never went back to play-action out of that set. We seemed convinced that we could simply wear-down JMU's defense and take advantage in the fourth quarter. We did that for the most part, but couldn't convert on a well-designed fourth-and-two and fumbled on our last drive.

Two more things I noticed that I hope get fixed from here on: