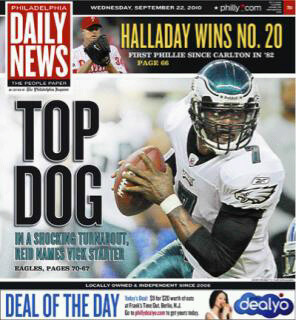 Yesterday, former Virginia Tech quarterback Michael Vick was named the starter for the Philadelphia Eagles. Above is today's Philadelphia Daily News, proclaiming Vick to be the Eagles' "Top Dog" (H/T: The Todd).

Honestly, I expected a lot worse from a newspaper that told Philly residents to "hide their dogs" when Vick was signed last season. You're slipping, Philadelphia Daily News.

My question to you guys is this: Is the above headline fair game? Should Vick still be subject to ridicule for what he did? Or should everyone just let it go and let him move on with his life after paying his debt to society?

More: SBN Philly has more on Vick being named the starter. SBN Atlanta offers its own opinion. Frank Beamer told the AP that Vick's story still has chapters to be written.