The ACC announced Sept. 26 the Hokies' game at NC State will kick off at 3:30 p.m. EDT on Oct. 2 and be televised regionally by ABC. The network's college football coverage for the 3:30 time slot will be divided between Virginia Tech-NC State, Oklahoma-Texas and Wisconsin-Michigan State.

The Hokies' game will not be a part of ESPN's reverse mirror coverage for Oct. 2, so if the game is not televised by ABC in your area, you'll have to watch the game online at ESPN3.com or buy it on pay-per-view through ESPN GamePlan.

The coverage map for Virginia Tech's game will be released by ABC on Wednesday, Sept. 29. I'll update this page with more information when the maps are released. The Hokies and Wolfpack will likely only be televised in the ACC's geographic footprint.

UPDATE: Here is the coverage map for the game, from HD Sports Guide: 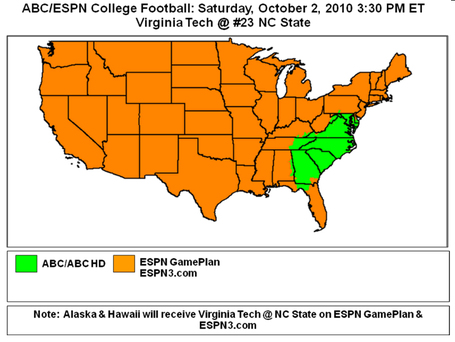