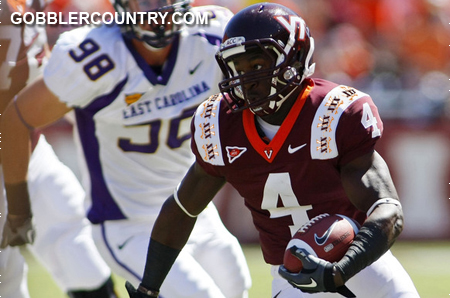 From hockey uniform site Icethetics comes this story from the Winnipeg Free Press about the Hershey Bears' recent uniforms that feature the logos of the two teams they beat for their back-to-back Calder Cup championships:

The Bears, one of the most storied and successful franchises in pro hockey, who will be in Winnipeg for a pair of games today and Saturday with the Manitoba Moose, have been featuring the logos of recent victims on a set of jerseys in a move right out of Wilt Chamberlain's book.
[...]
Back-to-back Calder Cup champions, Hershey put together a jersey with a Moose logo on one shoulder and a Texas Stars patch on the other.

Like Icethetics, I found the idea kind of appalling, although you have to admire the guts it takes to put such a colossal "screw you" to your victims right on your jersey. If the Hokies did that, it would have to look something like the image above: David Wilson carrying the rock with seven UVa logos adorning each sleeve. You know, since we've beaten the Hoos seven consecutive times.

Of course, I couldn't tolerate the idea of having the dopey scissors on our unis, so I added some x's over them, fighter pilot-style. What do you think? Would this be a good look?