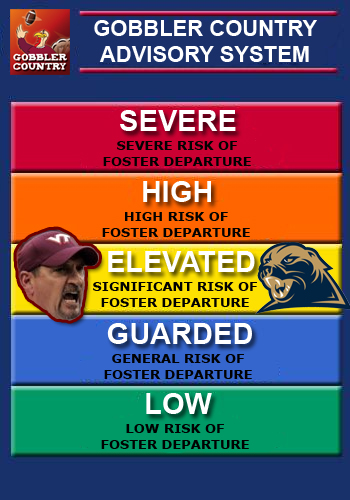 Penn State defensive coordinator Tom Bradley and Tulsa head coach Todd Graham have also interviewed with Pittsburgh, with Bradley being the favorite to land the job. However, money could be an issue for both Bradley and Graham and Bradley is scheduled to interview at Connecticut Sunday.

The Pittsburgh job would certainly appeal to Foster because it's what he wants -- a head coaching job at a BCS school. With no guarantee about if and when he could become Virginia Tech's head coach, he probably realizes that his window for being a top candidate for other head coaching jobs is closing.

Foster would appeal to Pittsburgh because he fits the city's mentality and he'll probably be a lot cheaper than other candidates. I still think Bradley is the top candidate to land the Pitt job and until he is hired elsewhere or announces he's staying at Penn State, we'll keep the Foster Watch at "Elevated."

If Foster left, it would be interesting to see which assistants would leave with him. Keeping defensive backs coach Torrian Gray would be crucial to the Hokies for the strength of the defense, stability and from a recruiting standpoint.

Pitt is currently playing Kentucky in the Birmingham Bowl on ESPN. I'm sure the vacant coaching job will be a topic of discussion throughout. Stay tuned here, the SBN Pittsburgh Pitt head coaching search story stream and Pitt blog Cardiac Hill for more the story goes on.