Virginia Tech will face rival Virginia at 3:30 p.m. EST Saturday, Nov. 26 in Charlottesville. The game will be a split national broadcast along with the Oregon-Oregon State game and will be available to the entire country.

ESPN usually releases its regional maps on Wednesday and we'll update you when that happens. Basically, if the Virginia Tech game isn't on ABC in your area, it will be on ESPN2 and vice versa. More than likely, the eastern half of the country will see the Hokies on ABC and the western half will see them on ESPN2. The game will also be available online on ESPN3.

The winner of Saturday's game also wins the ACC Coastal division championship and will go on to face Clemson in the ACC Championship Game Saturday, Dec. 3 in Charlotte. That game will be on ESPN and ESPN3. Virginia Tech and UVa also squared off with the division title on the line in 2007.

UPDATE: Here is the coverage map for the game. The game will be seen on ABC on the East Coast and in SEC territory and on ESPN2 everywhere else. 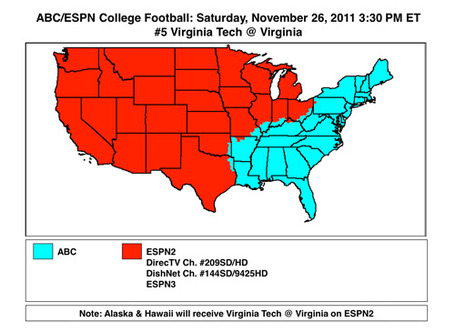