Get Ready for Techmo Bowl Bingo

Share All sharing options for: Get Ready for Techmo Bowl Bingo 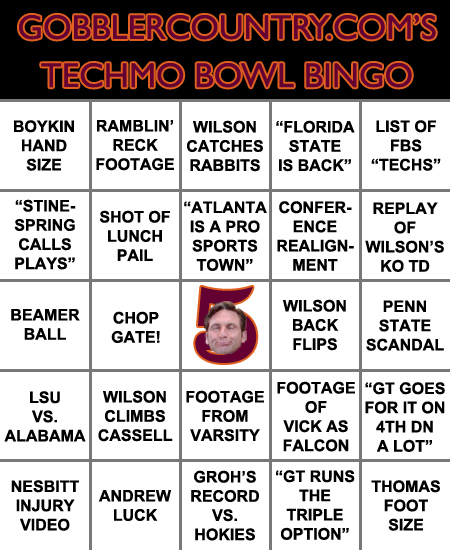 To make the viewing of Thursday's ESPN broadcast with Rece Davis, Craig James and Jesse Palmer a little more entertaining, here's a Techmo Bowl bingo board to keep track of some of the inane GT-VT related things and things outside the game that are bound to get brought up during the broadcast.

Check off the square whenever these things are said or shown:

- Jarrett Boykin wears XXXL sized gloves.
- We see the Ramblin' Reck lead the Jackets onto the field.
- The story of David Wilson chasing rabbits on the drillfield.
- Florida State's current state of backness is discussed.
- ESPN shows a list of FBS schools with Tech in their name.
- A broadcaster mistakenly says Stiney calls VT's plays.
- We see the lunch pail.
- A broadcaster calls Atlanta a pro sports town.
- Conference realignment is discussed.
- Wilson's game-winning KO return from last year is shown.
- Beamerball is brought up.
- The chop game kerfuffle is mentioned.
- CRAIG JAMES FREE SQUARE!
- Wilson's ability to do back flips is mentioned.
- The Penn State news is discussed.
- Last week's LSU-Alabama game is discussed.
- The story of Wilson scaling Cassell Coliseum is told.
- We see a large woman yelling "WHADDAYA HAVE?!"
- Michael Vick played for VT! And played in the ATL! Here's video!
- CPJ's propensity to go for it on 4th down is mentioned.
- We see Nesbitt throwing a pick and then breaking his arm on the tackle.
- Andrew Luck's football prowess is discussed.
- Al Groh's record against Virginia Tech is mentioned.
- A broadcaster mistakenly calls GT's offense the "triple option."
- Logan Thomas' size 18 shoes are mentioned.