Virginia Tech's softball team has struggled to repeat the success it saw during a magical 2008 season that saw 49 wins and a berth in the Women's College World Series. Obviously, much of that success could be contributed to the pitching mastery of senior Angela Tincher, who was named player of the year.

The post-Tincher era has seen the Hokies go a combined 53-61 and 16-23 in ACC play. However, the Hokies have an experienced team returning in 2011 that could produce a winning season. Tech had a losing record in 2010, but went 8-5 over its last 13 games, including a pair of wins over No. 19 Florida State and 5-1 over its last six games. Then, the Hokies upset second-seeded Virginia in the first round of the ACC Tournament.

Tech is picked to finish seventh in the ACC by the coaches, but could be the league's surprise team if its seniors step up. We'll get our first look at the Hokies this weekend when they play in a tournament at UNC Charlotte.

Virginia Tech has 22 games scheduled against teams that played in last year's NCAA Tournament, including seven on its non-conference slate. That includes a match-up with perennial power Arizona State March 12 in Tempe, Ariz. That game is part of one of five early-season tournaments for the Hokies at UNC Charlotte, Charleston Southern, Coastal Carolina, Central Florida and Arizona State.

In ACC play, the Hokies will have four home series and three away series. Unfortunately, those three series are against three of the top four teams in the preseason ACC coaches poll: North Carolina, Florida State and Virginia. The defending conference champion and preseason pick to win the league, Georgia Tech, will visit Blacksburg April 9-10.

It will be important for the Hokies to win at least four of their nine road games in order to have a chance in league play. At home, the Hokies should be able to win their series against Maryland, NC State and Boston College. Those dates with Maryland on April 30 and May 1 will mark a return to Blacksburg for Tincher, who is the Terps' pitching coach.

The Hokies need to take advantage of their home-heavy conference schedule and win seven or eight of those 12 games. If they can do that and steal a series on the road, the Hokies would far surpass their expectations.

In the end, the Hokies will probably only go as their pitching takes them. Softball is a pitching-dominant sport and as we saw in 2008 with the Hokies, a great pitcher can take you to unknown heights.

Kenzie Roark is one of the few links remaining from that WCWS team, when she pitched 58.0 innings as a freshman, including six starts in conference play. Her first year as the team's full-time starter in 2009 was a tough one, but many of her numbers improved last season.

As a starter in ACC play, Roark's average, on-base and slugging percentages against all fell. However, her ERA rose from 2.95 to 3.59. However, Tech won in her last three starts conference starts last season, in which she was 2-0, 2.58. 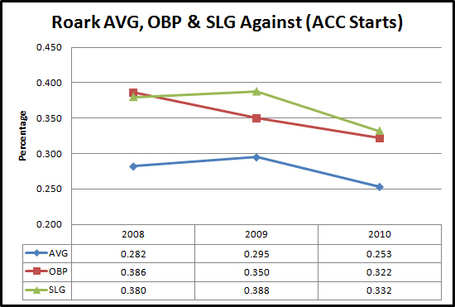 If Roark can continue her improvement, the Hokies could finish in the top half of the ACC standings, which would probably put them in contention for a postseason berth. She could have some help in 2010 in sophomore Jasmin Harrell and senior Ashton Ward, who is in her second season in Blacksburg after transferring from Tennessee.

The Hokies return six of their nine starters from last season, but lost OF Whitney Davis, SS Misty Hall and 1B Kristin Graham. In ACC play, Hall batted .280 with a team-high seven home runs and 16 RBIs. The key for the Hokies will be replacing her power, which helped them finish second in the ACC in slugging and home runs in conference play.

Last year McGarva hit a team-high .290 in ACC play with four homers and 12 RBIs. She also only struck out nine times in 62 at-bats, which is significant for the Hokies, who had the second-most Ks in ACC play with 143.

It was a weird year for the Hokies at the plate in 2010. They showed both power and speed, with the second-most home runs (21) and tied for the second-most stolen bases with 22. However, Tech just couldn't get on base. It was sixth in average (.218) and on-base (.304) in league play. If the Hokies can remedy this, they have the tools to have a successful season.