Memories of a Football-Obsessed Childhood

Share All sharing options for: Memories of a Football-Obsessed Childhood

My parents are bound to wind up on Hoarders, so of course they've kept every trinket I ever owned or book report I ever wrote. The result, as I found out when I went to help them move recently, was that there was a bunch of stuff laying around that I didn't want to be aired on A&E when their cameras finally got around to filming them digging themselves out of their piles of rubble.

While I was shoveling massive amounts of stuff into trash bags and secretly throwing them away when they weren't looking, I noticed that nearly everything I ever owned had something to do with sports, usually football. I figured I'd share some of the really worthless (and some of the not-so-worthless) stuff I found. Hope you find it as interesting as I did, even though you probably won't. 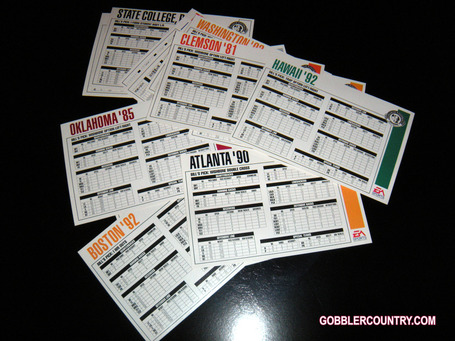 Sure, we all had football games growing up, but the things that I found interesting were what came with the games. The best were these cards from Bill Walsh College Football that had the rosters and "Bill's Pick" for best play for all the teams, including Raleigh '92 and Atlanta '92, otherwise known as NC State and Georgia Tech. Remember, this was well before EA Sports bought the full rights to the CBAA and kicked Cartman and Kyle to the curb.

What was also great about Bill Walsh College Football was that nearly every team ran the option. If you wanted to throw you were going to have to play as Boston College or someone else horrible. 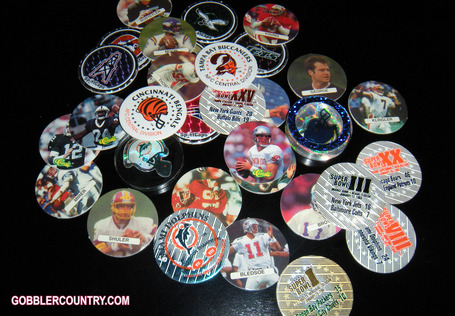 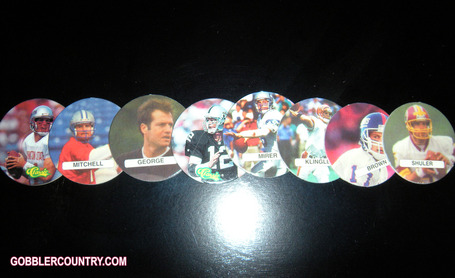 Pogs were big when I was a tyke and of course I blended my obsession with football with my sheep-like following of pogs and pog culture. As a result, I collected all of the above pogs thinking they would someday be PRICELESS. From left to right: Drew Bledsoe, Scott Mitchell, Jeff George, Todd Marinovich, Rick Mirer, David Klingler, Dave Brown and Heath Shuler.

Pricless, I tell you. Priceless. 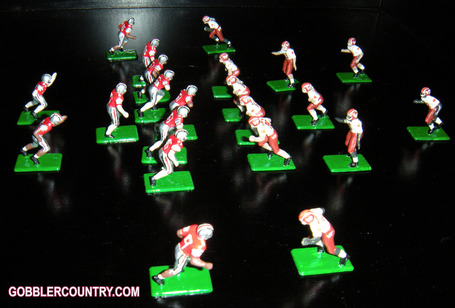 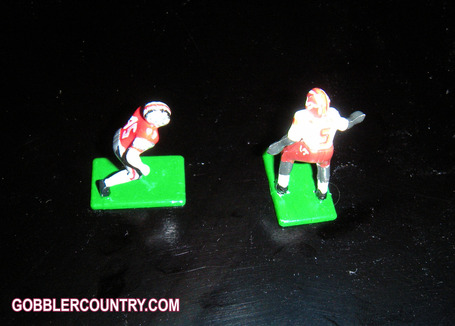 I was REALLY into electric football in the late 90s and owned boxes and boxes of teams that I either bought or painted and multiple boards. Here we see the 1998 Hokies and Buckeyes. Tech was painted by my uncle while I was the artist behind the Bucks. In hindsight, I picked a good year to be obsessed with this stuff because I also painted Drew Brees' Purdue Boilermakers, Cade McNown's UCLA Bruins, Shaun King's Tulane Green Wave and the eventual national champion Tennessee Volunteers.

As an aside, how awesome was that '98 season? You know, other than Tennessee winning the title. 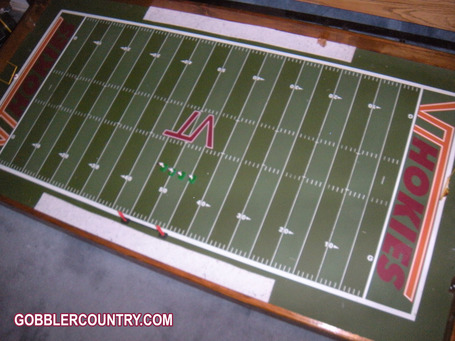 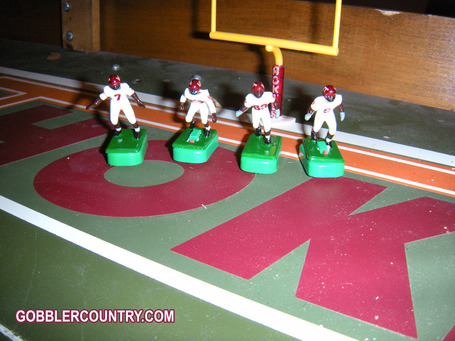 OK, now these I'm proud of, to hell with all of you. Yes, that is a custom Virginia Tech electric football board, nearly six feet in length, which played host to all home games for the 1999 Hokies. Both were Christmas gifts from my uncle. He's and ECU grad and made similar boards and teams for the '99 Pirates so we could play home-and-home games. He always kicked my ass because as sad and pathetic as my childhood was, at least I wasn't in my 30s and spending all my free time practicing electric football so I could beat my teenage nephew. Just kidding. Sort of. 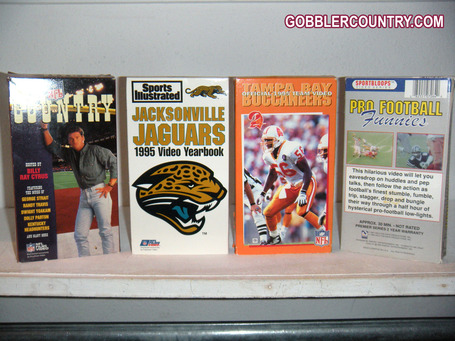 The tape collection really shows how sad and pathetic I was in the mid- to late-90s. First there were the piles and piles and piles of taped live games that had things like "Virginia Tech-Boston College 1998 DO NOT ERASE" written on them. There was also an Army-Navy game, a De La Salle-Long Beach Poly high school game (featuring Maurice (Jones-)Drew) and of course tons of Tech games.

Then there were the NFL Films tapes. There were a ton of them, but the four most ridiculous ones can be seen above. There's NFL Country, hosted by none other than the one and only Billy Ray Cyrus, the 1995 video yearbooks for the Jags (who had yet to play a season) and the 6-10 Bucs and a USFL blooper vid. I actually watched all of these as a lad. Holy crap. 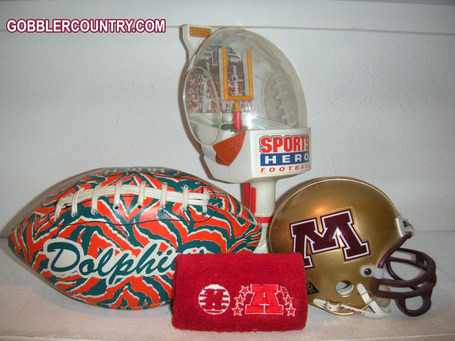 Why in the hell was I even allowed to buy these things? No kid needs these things, especially the mini Minnesota football helmet. I don't live in Minnesota. It was probably an impulse buy by 10-year-old me whose parents weren't willing to teach him common sense things like, "Don't buy worthless crap you'll regret owning in 15 years."

One thing I am kind of proud of is the Zubaz football. The fact it even exists is awesome and of course the Dolphins had the best colors for all things Zubaz. Teal and orange? Zubaz was started with franchises like the Dolphins in mind. And of course I bought everything they made in those colors. Hell, if they made Virginia Tech Zubaz pants today I'd own seven pairs and fiancee4heisman would divorce me.

Other randomness: I hand-held football game in which you did nothing but kick field goals. Bryan Stinespring approves. And among my somewhat extensive Hutch football wrist band collection I managed to find one with just the AFC logo on it. There was only one of them. Who knows what the hell happened to the other one.

So there you go. An array of things I figured I'd snap a few photos of and share with you guys before they get sent to Goodwill, sold in a garage sale or stuffed back into storage. Did you guys have any of this crap?