Share All sharing options for: Upping the Ante in College Football's Turf War

There is already a litany of reasons to visit lovely Conway, Ark. There's majestic Toad Suck Park, the Stuckey's and ... hey, did you know there's a Stuckey's? Anyway, you can add one more reason to visit Conway: The above atrocity that's being installed at Central Arkansas' Estes Stadium.

The Bears have one-upped the colored turf at Boise State and Eastern Washington by bringing an alternating purple and gray scheme to the Southland Conference. Is UCA's abomination the latest reason the NCAA should regulate turf color? Absolutely. Is it also so incredibly ugly that it's also magnificent and will eventually get me out to a Bears game? Absolutely.

For a long time, Boise State's smurf turf was unique in the college football world. They were the outlier that defied convention and killed birds. Then Easter Washington's retina-burning red turf was allowed to come into existence last season, opening up a Pandora's box for schools wanting to stand out and earn headlines for football programs otherwise lost in the crowd.

The problem is where the line gets drawn. UCA has laid down the gauntlet for the next school. But how do you top purple and gray? Easy. UCA may think it can out-do the rest of college football with purple and gray, but they hardly have the worst color combination out there.

I see your purple and gray, UCA, and raise you the clashtastic maroon and orange turf that awaits college football's future. 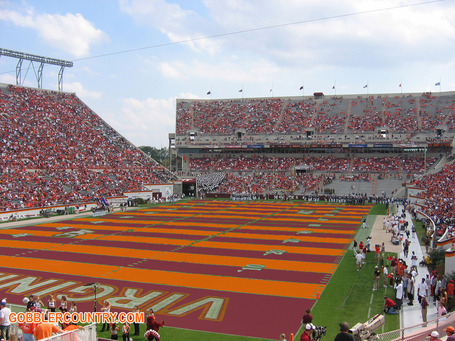 Admittedly it's a bit Picasso, but you get the idea. Let's get this done before the NCAA finally outlaws anything but green playing surfaces. We can show UCA, Boise State and Eastern Washington they have nothing on Virginia Tech's turf capabilities.

Then maybe the NCAA will finally step in and stop the madness. Or after Tennessee outdoes us all and installs a full checkerboard playing surface. Or after Arizona State installs one with flames. Or...

UPDATE: Edinboro installs a plaid one. Or...