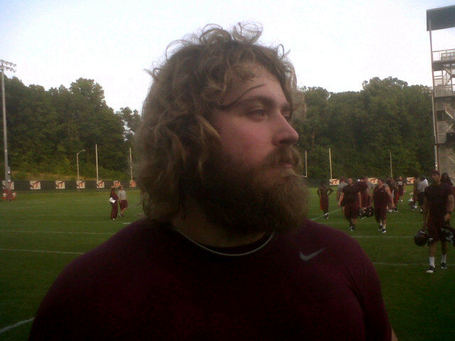 Courtesy of Kyle Tucker, that's offensive lineman Blake DeChristopher in all of his homeless glory. DeChristopher sat out the first practice of the fall Thursday thanks to a strained pectoral muscle he suffered during max weight testing (sigh) recently.

DeChristopher, the starting left tackle, and his linemates were the main topic of discussion after the first practice as the line tries to get going without he and starting guard Greg Nosal. After the jump, will hear from those who were actually at that first practice, via the wonder of Twitter.

Lanier and Oline Coach Curt Newsome both see injuries to DeChristopher and Nosal as a positive given all the extra work reserves will get.less than a minute ago via TweetDeck

O-line coach Curt Newsome said, at this point, Michael Via will only get reps at RT and not at center, where he was supposed to be No. 2.less than a minute ago via web

Let me get this straight, the guy who is our No. 2 center has been moved to No. 1 right tackle now that our No. 1 right tackle might not be ready in time for the first game of the year? So basically we have no depth. Good to know. Is there any good news on the offensive line?

Goforth said he expects starting OG Greg Nosal to return to full strength soon. He was in blue Thursday.less than a minute ago via web

Getting Nosal back will be big for the Hokies. We still need DeChristopher to be ready for the start of the season, but his absence is only multiplied by Nosal not being at 100 percent. It's been a long time since the Hokies' offensive line was clicking to start a season. Without Nosal and DeChristopher, it won't be this year either.

DL coach Charley Wiles, on first impression, thinks Maddy and Kris Harley can push for playing time as true freshmen at D-tackle.less than a minute ago via web

After Kwamaine Battle and the Hopkins Brothers, things look to be wide open at defensive tackle. That doesn't bode too well for this year as the Hokies will again be paper thin on the D-line. However, the future looks good at the position at least in terms of depth.

According to Mike O'Cain, the back-up QB hierarchy at the moment is R-Fr. Mark Leal, R-Jr. JuJu Clayton, and then R-Fr. Ricardo Young.less than a minute ago via TweetDeck

Leal continues to lead for the backup QB job after taking the lead in the spring.