While the bowl games are often criticized and ripped by fans and media alike, it's easy to overlook some deeds that deserve to be noticed, and proclaimed. Gobbler Country provides two examples of such gems below.

Share All sharing options for: Virginia Tech Provides Gems In A Cyncial World

Let me be up front first. I don't like the bowl system. I think it is a grand extortion scheme that puts schools on the hook to sell tickets that I think the bowls should be responsible for, and I am so surprised that the Department of Justice has not investigated them for monopolizing college football. The NCAA is also a joke of an organization that pretends to care about the so-called student-athletes that bring billions of dollars into the coffers. The NCAA frowns upon "impermissible benefits" from boosters, fans, tattoo parlors, etc., but encourages bowl games to shower lavish gifts upon the teams that come to the bowl games.

Should I say it? The NCAA is the most hypocritical organization on the face of the Earth. They oppose everything to give more scholarship money to football players to cover rising living expenses while subjecting their bodies to brutal training, risking injuries, and potential life-threatening situations that can arise while playing football.

In short, I am cynical about the NCAA and the bowl system. I am counting down the days until the playoff arrives and speeds up the death of the BCS system.

Per the NCAA's rules, bowl games are allowed to give up to $500 in gifts to each players, and one of the gifts for Virginia Tech's players was a $470 spending money at Best Buy.

It was awesome to see that a football player, a starting defensive back on Bud Foster's defense, spend money on three random strangers whom he had never met before, instead of himself. It was inspiring. I sent a tweet to Exum to let him know I respected that. 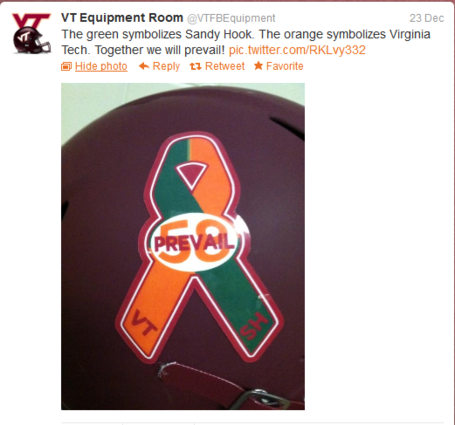 Virginia Tech decided to honor the past and the present by wearing this ribbon during practices, and a smaller ribbon on the back of the helmet during the bowl game. My only issue with the ribbon is the number 58 is difficult to make out, but that is purely from a graphic design point of view.

That has not stopped other cynics from bashing Exum for his honorable deeds or criticizing Virginia Tech's inclusion of the 32 students who died at the hand of a lone gunman.

Both deeds made their way to national media outlets like Deadspin, Sports Illustrated, ESPN, and even Yahoo! Sports.

Good deeds should be recognized and praised instead of being scoffed at.

Whether Virginia Tech will win the bowl game or not, sometime it's the things like what Exum did or simply honoring the dead with a ribbon on the helmet that make the difference. And for these gems, the Hokies have already won something far more important thing than a football game.