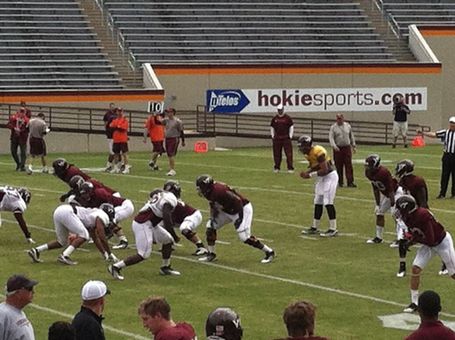 It was a gorgeous morning in Blacksburg Saturday as the Hokies held their second of three public scrimmages inside Lane Stadium. As usual, the 90-minute session was peppered with miscues that will be cleaned up by September. However, a few things stood out afterwards, none more so than the play of redshirt freshman tailback Michael Holmes.

Holmes erased any doubt that he's the best of the bunch in the backfield with 89 yards on eight carries Saturday, including a 60-yard touchdown dash against the second-string defense. What looked like a three or four-way battle for carries at the outset of spring practice seems all but over after Holmes' performance.

More thoughts on Saturday's action after the jump.

Before we get away from Holmes, he ran with good vision and decisiveness. It is cliche to say, but he truly does use a nice blend of speed and power. He's not going to unleash the fury a la Darren Evans vs. Maryland in 2008, but he can carry defenders for a few extra yards while also having the ability to make defenders miss in the open field. If I had to compare him to a former Hokie running back, I'd go with Branden Ore.

By the way...Holmes 60-yard scamper came on an outside zone play out of the Pistol formation, which has been a hot topic since last week. Tech used it about 8-10 times Saturday, about half of which came using the first-string offense.

Logan Thomas got off to an extremely rough start before settling down about midway through the session. He threw a handful of ill-advised passes into heavy coverage and was intercepted twice?. To be fair, he was dealing with a shorthanded receiving corps that was missing Marcus Davis and D.J. Coles, the likely top two receivers this season. Thomas finished 9-of-23 (five drops) with 4 touchdowns.

Corey Fuller caught three touchdowns Saturday, but it was an extremely inconsistent effort from the redshirt senior. He dropped three passes that should have all been easily caught. You could see the frustration in his body language following the second drop, which is when he reeled in the next two balls thrown his way for touchdowns. He finished with four catches for 34 yards.

The offensive line was again ragged, but relatively improved from last week's debacle. They were shaky in pass protection, but it was not as bad as last week's 11-sack debacle. The lanes paved in the running game were encouraging. There is still a long way to go, but any improvement at this stage should not be taken for granted. Remember, the defensive front the offense is facing right now is one of the absolute best in the country.

On that note, Vinston Painter held his own for most of the day against James Gayle. Gayle still made his presence felt in the backfield on occasion, but Painter wasn't dominated in what seemed like a sizable mismatch entering the day. I keep hearing how well Painter is doing in practice after a great off-season. Seems like the redshirt senior is finally realizing his potential. Better late than never.

Randall Dunn made some serious noise today at tight end. He caught two touchdowns and showed the ability to go up and make catches in traffic. His second touchdown came after grabbing the ball amongst three defenders, shedding all three tacklers and juking past another into the end zone. He has to be the favorite to earn the starting job. Eric Martin is absolutely no threat in the passing game whatsoever. If Ryan Malleck improves as a blocker, he should be Dunn's primary challenger at that spot.

Chase Williams was a monster at linebacker, making 6 tackles and three TFL, including a safety. He showed great instincts, played fast and downhill. If he stays healthy, he'll be a major boost to the depth at linebacker this fall.

Granted, it was against a depleted receiving corps, but Kyle Fuller looked outstanding again. He's the most complete cornerback at Virginia Tech since Brandon Flowers. Antone Exum is going to be just fine at boundary corner. The coaches wanted him in that position to take advantage of his physicality and just flat-out elite athleticism. As he learns the nuances of the spot, he'll be a shutdown guy.

Detrick Bonner nearly beheaded Kevin Asante on a crossing route, forcing the ball to pop out into the hands of free safety Kyshoen Jarrett. Both Bonner and Jarrett look comfortable at their new safety gigs. Again, it's hard to judge too closely given the receiver situation today, but the secondary could have been a lot worse and it wasn't.

Michael Branthover is fading fast as an option on field goals, but has taken a commanding lead in the punting competition. His lone field goal today was blocked (as was the case last week), but all three of his punts went 40-plus yards with good hangtime.

Conor Goulding took an impressive step forward today. After drilling kicks from as deep as 50 yards in warm-ups, he nailed all three of his field goal tries during the scrimmage. Now, it's important that he builds on his best showing to date, but it was a surprisingly positive output Saturday.

The next and final chance for fans to watch the Hokies before August will be next Saturday's Maroon-White Spring Game, which will start at 4 p.m. and will be broadcast live on ESPN3.com.