Share All sharing options for: Impressions from First Spring Scrimmage 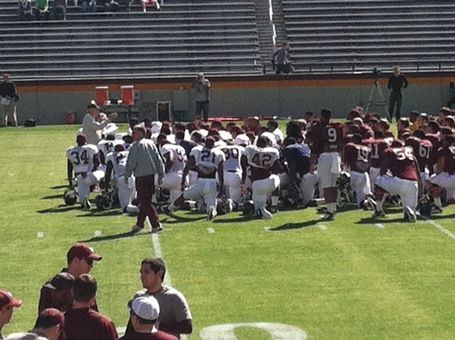 The gates at Lane Stadium were open again Saturday morning as the Hokies held their first of three public scrimmages this spring, the last of which will be the Maroon-White Spring Game on April 21.

As expected, a veteran defense is light years ahead of an inexperienced offense. The only offensive touchdown came late in the day when only the backups were on the field. Trey Gresh connected with David Mellstrom on a 22-yard strike. The only other touchdown of the day came on a 57-yard interception return by Kyle Fuller off of Mark Leal.

Some thoughts on the scrimmage, which lasted just more than an hour, after the jump.

First of all, the defensive line is going to be virtually unstoppable this year. James Gayle and Luther Maddy were particularly dominant Saturday. The top eight defensive linemen from 2011 are back, and they overwhelmed the No. 1 offensive line. When the starting defense lined up across from the second offensive unit, it was legitimately unfair. As a group, the defense made 11 sacks for a total of 85 yards. Bud Foster told The Roanoke Times' Andy Bitter afterwards that Maddy has been the most improved guy this spring on defense.

The secondary shuffle this spring that has landed Antone Exum at boundary corner, Kyshoen Jarrett at free safety and Detrick Bonner at rover is still a work in progress, but there were encouraging signs Saturday. Exum had an up-and-down afternoon. He was beat on a stop-and-go route against the second unit, but Leal overthrew the intended receiver. Late in the scrimmage, Marcus Davis beat Exum on a deep out for a first down. Otherwise, Exum was in good position most of the day and was strong in run support and an occasional blitz.

Fuller looked outstanding at field corner with several pass break-ups in addition to the easy interception. He shut down older brother Corey in some late 1-on-1 battles against the starting offense.

Wide receiver depth is a big concern for the Hokies. The offense almost exclusively used three-wide sets with some combination of Marcus Davis, Dyrell Roberts, Corey Fuller and E.L. Smiling in the first group. Fuller and Smiling are still shaky route-runners and created absolutely no separation from the defense in the second and third level of the field. With D.J. Coles out this spring (PCL surgery), Fuller and Smiling need to take advantage the precious extra reps. All signs point to incoming freshman Joel Caleb being an immediate impact player in the passing game this fall. 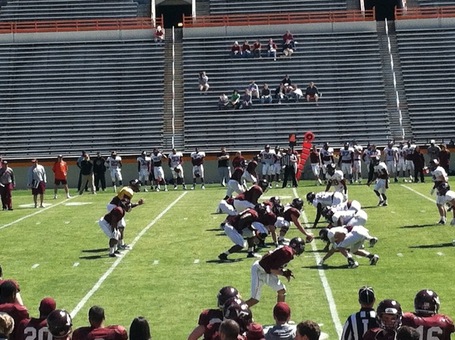 In the backfield, the most impressive run of the day came courtesy of a converted fullback. Martin Scales took a hand-off from the shotgun, bounced his way out of trouble towards the sideline, stiff-armed one tackler to the ground before picking up 13 yards. The play drew some of the biggest cheers from the crowd all day. Scales was surprisingly effective and finished with 26 yards on the ground. At least after Saturday, it would seem too early to completely write him off in the battle for carries this fall.

J.C. Coleman finished with 14 yards on six carries. He showed a little bit of the wiggle that made him a blue-chip recruit, but was very tentative between the tackles. Improvement in that regard can only come with time. According to Bitter, Michael Holmes had 14 yards on four carries in very limited action.

Funny side-note. David Wilson was in the house Saturday, and during warm-ups he called out the rookie Coleman for what he thought was a soft blow in the running backs' "Bull-In-The-Ring" drill. He started laughing and told Coleman to go again. This time, the young buck (who is donning Wilson's old No. 4) made a better pop with his shoulder pads, and Wilson approved. I'm sure Wilson had more constructive advice for Coleman after the scrimmage.

It was a rough day for the kicking game. Michael Branthover followed up completely mishandling the snap on his first punt with an immediate 37-yard field goal that was blocked. Frank Beamer said earlier this week he thought Branthover had the edge for the moment in the placekicking department, but Conor Goulding had the better day Saturday...relatively. Goulding made 2-of-4 tries, all from inside 40 yards. Cody Journell's status with the team is still up in the air, and his absence leaves a massive void in the Hokies' kicking game. Branthover did show off his leg with a 47-yard punt later in the day, but Jarrett was on his way to a 90-yard touchdown return when coaches blew the play dead. Jarrett and Dyrell Roberts are locked in a battle for the starting punt returner job. That isn't likely to wrap up until August.

Finally, Logan Thomas wasn't very sharp in his spring debut. He finished 3-of-12 for 52 yards and one interception, which came on a poorly thrown post route that was too high for Dyrell Roberts and fell into the hands of Ronny Vandyke. He was under pressure most of the day, but there were still a handful of throws that were uncharacteristically bad. Two of his three completions came on third-and-long, however. Another potential third-down conversion was inexplicably dropped by Marcus Davis. Davis did make a few nice grabs downfield throughout the day and finished with three catches for 56 yards.

It should be noted that Vandyke has passed Nick Dew at whip linebacker and played very well Saturday, even without the pick. Alonzo Tweedy led the team with five tackles, 1.5 for a loss.

While the offensive struggles are a tad uncomfortable, it's hardly a reason to panic. The defense always has been, and always will be, in much better shape than the offense this early in the spring. It didn't help the inexperienced offensive line that it was going up against what will be one of the five best defensive fronts in the country this season. Nevertheless, Thomas looked a little rusty and the running backs have a lot of growing pains yet to endure.

The next open scrimmage is Saturday in Lane Stadium. Spring ball is a process (Copyright: Nick Saban), and there should be visible improvements next week.