Share All sharing options for: James Gayle Is Awesome

James Gayle was picked to the All-ACC second team a year ago for his performance as a first-year starter. This morning Gayle was picked to the Preseason All-ACC team by the ACC media. He was one of three Hokies selected, all on the defensive side of the ball. But even those accolades don't paint the whole picture of James' awesomeness. There's something else. For a first-hand look into why James Gayle is awesome, continue reading after the jump.

After the Preseason All-ACC first team were released this morning, Tomahawk Nation took exception to several perceived omissions of Florida State players from the first team and took to the twitterverse: 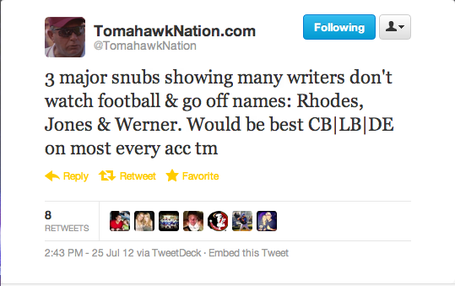 This guy reacted by saying: 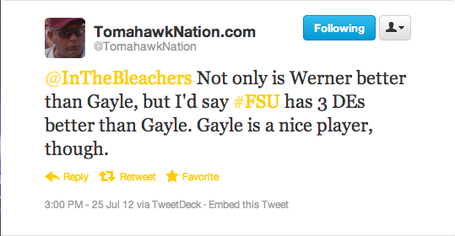 To which James Gayle responded:

THAT is why James Gayle is awesome. Something tells me James will not be getting a lot of love from Florida State fans this year.

After that tweet, it has digressed into name-calling of the "you look like ____" variety between Gayle, Tomahawk Nation and FSU fans. Gayle said that it's in good fun, and some of the tweets both ways are really funny, but still, it's probably dangerous considering the tolerance or lack thereof we've seen recently for tweets exchanged between players and fans.

While the FSU defense is touted as being one of the best in the country, so too is the Virginia Tech defense which will return nine starters, including four who were injured midseason a year ago.

For some statistical analysis, I decided to compare Gayle and Bjoern Werner head-to-head. Gayle had 38 tackles to Werner's 37, 12.5 tackles for a loss to Werner's 11 and 20 quarterback hurries to Werner's 8. Gayle might be the best defensive end in the ACC, but if not, the list of those above him isn't a long one. Certainly he would not have three defensive ends ahead of him on the depth chart at any school in the nation.

Thanks to our cohorts at Tomahawk Nation, their fans and readers and James Gayle for being awesome. For more Florida State football news, Tomahawk Nation is the place to be. For more Virginia Tech football, uh...you're here! It's Gobbler Country!