The Hokies completed their first full-scrimmage of the fall Saturday, highlighted by offense (In August?) and new Beamer and Stinespring offensive wrinkles: Pistol, Shotgun galore and the hurry up (whaaa!? In your best Hubert J. Farnsworth voice). Yup, untraveled roads indeed for this Hokie program under Beamer.

There were several stars of the 78-play scrimmage, and a couple of goats (our cornerbacks), which will all be covered below. We will also recap the practice and take a look at some of the position battles shaping up, all for the low, low price of...well, clicking the continue reading this post button. So DO IT!

First off, let's get to the big plays of the scrimmage, and we'll start with the one that every Hokie has been talking about: the J.C. Coleman run that was reminiscent of David Wilson or Ryan Williams. There was no bigger play than the freshman's 52-yard jaunt that helped him to a four carry 54-yard day. That play, as well as video of some of the other big plays can be seen here. Coleman's explosiveness bodes well for his opportunity to play this year, something that hasn't really been in doubt for a while. Hampered by a fractured right hand earlier in the week, Coleman seemed uninhibited by the injury, or as Frank Beamer so eloquently put it: 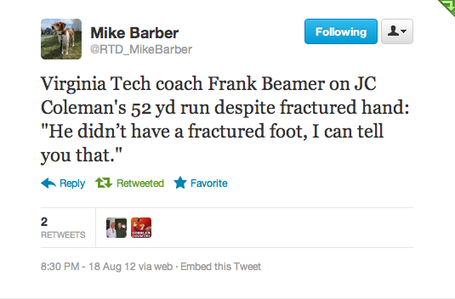 J.C. Coleman also had a pretty quotable take on his big run: 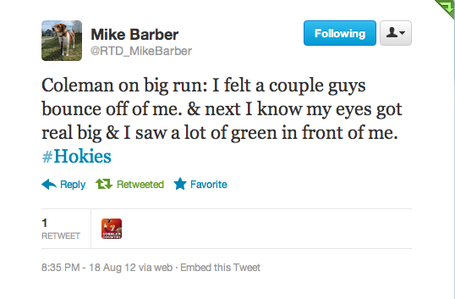 As for the rest of the running back corps, fellow freshman Trey Edmunds finished with eight carries for 45 yards, Tony Gregory rushed for 36 yards on five carries and the group's only touchdown, Michael Holmes carried it three times for 21 yards and Martin Scales ran it two times for 11 yards. Edmunds' continued success is making the decision on who to redshirt hard for the staff. At this point the only thing that seems to be a certainty is that J.C. Coleman will be in the picture this year, perhaps filling a role that David Wilson did for the Hokies in 2010 and one that Ryan Williams was supposed to fill (before Darren Evans' injury) in 2009. The staff really likes Scales, and if he can cut it I'm all for it, but I'm afraid that he lacks the talent of some of the other options at the Hokies disposal. Nevertheless, if Tony Gregory can return to anywhere near his 2010 form in addition to Scales providing depth, there would seem to be little reason to the staff to consider using a freshman and burning a year of his eligibility. According to this Mike Barber tweet, the staff will analyze the freshman they think can contribute this season on Sunday. 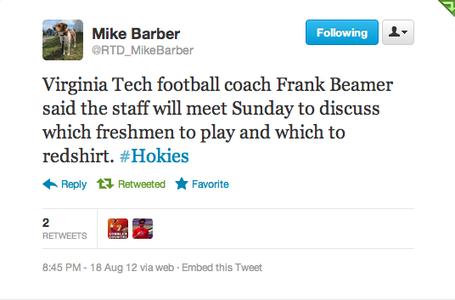 As for the receiving core, we have heard many reports about freshmen Joel Caleb and Joshua Stanford in recent weeks, but it was redshirt-freshmen Kevin Asante that stood out today. Asante caught a 40-yard touchdown pass from Leal, and finished the day with four receptions for 79 yards, leading all receivers. Corey Fuller also shined, catching three passes for 68 yards and a 30-yard touchdown from Logan Thomas. E.L. Smiling also caught a 37-yard pass from Gresh on the scrimmage's last play to finish with two receptions for 46-yards. Caleb had a reception for three yards and Stanford caught two catches for 38 yards. The more depth and production we get from the receiving core this year the better, especially since we are likely to pass more. This year it would help to offset the losses of Danny Coale and Jarrett Boykin whose departures facilitated experienced receivers moving into their spots, but unfortunately left the spots that those receivers vacated without heir apparents. Finding productive options going forward is also important considering that the top three (and maybe four if Fuller sticks as the fourth) receivers are seniors.

As for the tight ends, Ryan Malleck, Randall Dunn and Duan Perez-Means all recorded receptions. Perez-Means had two catches for 26 yards while Malleck and Dunn both recorded one catch for 12 yards apiece. Apparently they were also in the backfield some as H-backs. That would be an interesting new wrinkle to the Tech offense, I just hope we don't get too cute and get away from what got us to where we are today. Malleck is starting to look like the favorite due to his versatility. Dunn is a great option as a pass receiver, but as I've said a bunch and I'll say again, is a wide receiver in a tight end's body (a.k.a. his blocking is porous).

But on the opposite end of the spectrum, our receivers and tight ends having success means that someone had to allow them to succeed. In this case, look no further than our young defensive backs (particularly cornerbacks). These tweets below should explain our plight at cornerback. 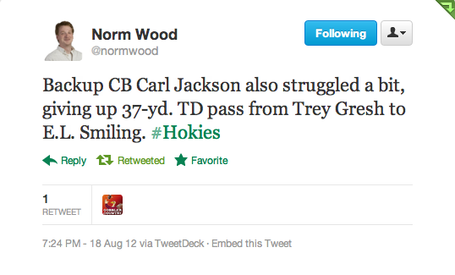 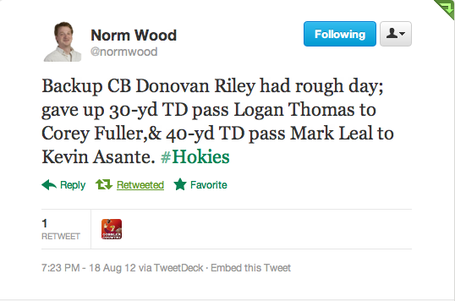 When asked about how the group struggled, Beamer said this: 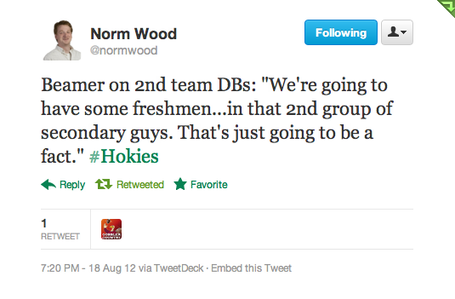 Nothing new here. Our depth at cornerback is a concern, and will probably remain that way for the majority of the season. If even one of those guys steps up on a consistent basis, I think we'll all feel a lot better.

As for the offensive line, they played pretty well, allowing only two sacks to the Tech defense between the first two teams (both on blitzes). As Hokiesports pointed out:

'Tech’s offensive line played very well in this scrimmage, which is surprising because most "first" scrimmages are usually sackfests. But the Hokies rushed for 174 yards and amassed 491 overall. Logan Thomas was sacked once, as was Mark Leal. The third-team unit allowed three sacks, but most of those guys are walk-ons or guys who are slated to redshirt this upcoming season. You’ve got to think that offensive line coach Curt Newsome will be elated once he watches the film."

As for the breakdown of yardage allowed by the first-team defense, Hokiesports pointed out:

As for the punting duties, Hunter Windmuller, previously thought to be the favorite for the job, had a pretty terrible day punting the ball. Windmuller averaged a measly 24.7 yards per punt on three kicks, compared to A.J. Hughes' 53.7 yards per punt in three kicks of his own. Though Hokiesports said that Hughes was the beneficiary of at least two big bounces, it's hard to take away from what he did do. This is a huge area of concern again for the Hokies, so the quicker they figure out who they guy is going to be, the less pressure it will put on the coaches/team worrying on who will be the guy to contribute.

Bruce Taylor recorded an interception, while Alonzo Tweedy, Alston Smith, Antoine Hopkins, Ken Ekanem and Luther Maddy all recorded a sack. A full tally of the statistics (including the defensive stats) can be found here, at the bottom of this Washington Post article.

In miscellaneous news, Cody Journell finished 2-of-3 with makes of 25 and 32 yards, but a miss from 40. Abbot finished 1-for-2 with a make from 41 and a 37-yard attempt that was blocked by Kyle Fuller. Also, on the injury front, Tariq Edwards was on the sideline on crutches after having a screw removed from his knee last week. Remember, it is not expected that he will be back by the Georgia Tech game. James Gayle (ankle), Demetri Knowles (neck strain) and Mark Irick and Davion Tookes (hamstring) all sat out of the scrimmage.

Lastly, the coaches and Logan Thomas gave their take on some of the new looks on offense and the accelerated tempo. Beamer said:

"I thought it was one of the more productive offensive first scrimmages we've had around here. I think we did some good things...I think we ned to keep working on that, kind of dictate the tempo. The key there is for us to know exactly what we're doing and maybe create some doubt in the defense."

Stinespring followed with his thoughts:

"It's closer. I think we've gotten closer. From where we started this thing to where we are now and what we're capable of doing within that tempo has really stepped up a bit. I'll be honest, I was pleased with that. Not satisfied, but pleased about [Saturday]"

Logan Thomas continued to praise those around him and dispel any concerns he has about the players he's surrounded by who are regarded by some as question marks:

He said something to the same effect at the ACC Kickoff, and often since then, so Thomas apparently has felt that way for a while. You've gotta love that confidence! As for his take on the new elements of the offense, Thomas said:

"For one, it gives us more plays, and for two it puts the defensive in a bind sometimes. It keeps them off balance. I'm excited to see what we can do."

Sometimes there isn't a lot to be taken from these scrimmages, but this would seem to be the exception. Though the highlights of the scrimmage were often provided by the offense (and their 491 yards), the starting defense didn't allow a touchdown and many young players got the reps they needed to potentially prove they deserve to play this year.

The Hokies will hold their second and final open scrimmage Wednesday at 4 p.m., once again in Lane Stadium. For more Virginia Tech football news and analysis, keep tabs on us here at Gobbler Country.